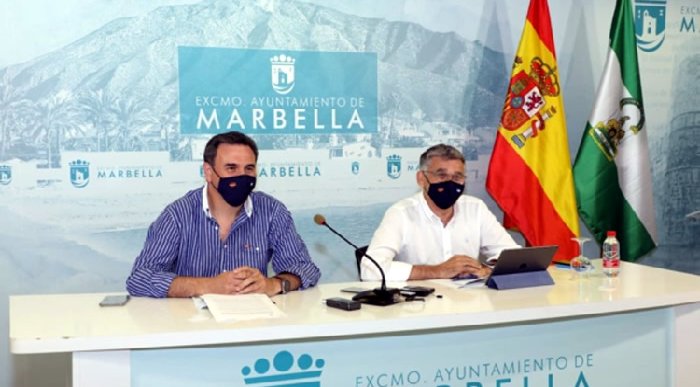 First Step Is Made In The Plan For San Pedro's New Bus Station. image: ayto marbella

Ángeles Muñoz, the mayor of Marbella, on Tuesday, April 27, signed a protocol with Marifrán Carazo, the Minister of Development, Infrastructure and Land Management of the Junta de Andalucia, to initiate action for the construction of a new bus terminal in the town of San Pedro Alcántara.
For this proposed facility to become reality, the first step is the acquisition of an 8,148m² building plot known locally as the ‘Sky of San Pedro’, located near to A-397 and the A7, which by a compulsory purchase order will be transferred to the regional administration, meaning that once the procedure is completed, the plot will be owned by the municipality, and the transfer can be made.
Javier García, the deputy mayor, accompanied by municipal spokesman, Félix Romero, are the officials responsible for offering the details of what García describes as “a very important agreement for San Pedro and for the sustainability and urban mobility of our city”.
The Junta de Andalucia plans to invest €750,000 in this project, which will be co-financed by funds from the EU, with the deputy mayor saying, “From this moment on, a public exhibition will be held, the allegations will be resolved if they are presented, and, finally, the plot will be incorporated into the municipal patrimony to transfer it to the Junta de Andalucía”, as reported by diariosur.es.
He continued, “thanks to an agreement with the owners who have to develop the partial plan for the area, we have reached a prior agreement for the early transfer of this land”, however, the terms of bidding and execution of the works for this new equipment cannot yet be foreseen.