Port Of Malaga To Auction A Merchant Ship For €0.00 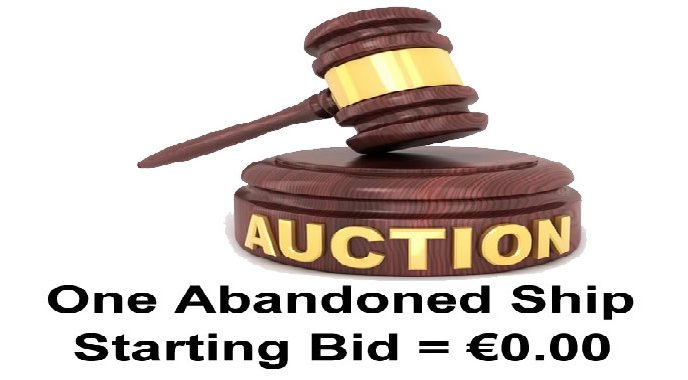 Port Of Malaga To Auction A Merchant Ship For €0.00. image: ck

Port Of Malaga Are Going To Auction Off An Abandoned Merchant Ship For €0.00

A merchant vessel by the name of ‘Ratibor’ has been lying stranded and abandoned, located on the left bank of the Guadalmedina river, after sailing from Algeciras on June 30, 2015, and was docked at dock No6. on what appeared to be a technical stopover, but is now for sale by auction, if you ever thought of owning your own ship and want to place a bid!
According to details in the Official State Gazette (BOE) this Monday 7, the auction is now open, and everybody is free to participate, with bids starting out from €0.00, in a second attempt to remove this unregistered vessel from the Malaga port area.
A previous effort to sell the Ratibor failed, but now, following a ruling on March 26 by the Commercial Court No1 of Cádiz, which declared that the ship is not registered in any known place, it is free to be sold free of charge, which is why the auction is starting from zero euros.
It is possible to visit the ship and view it, by prior appointment with the Port Operations Division of the Malaga Port Authority, from 9am until 2pm, Monday to Friday, and the auction has a deadline of July 26.
In the ship’s specifications, originally the property of Moran Maritime, a company of Russian origin, it is listed as a general cargo merchant ship, classified as a Standby Safety Vessel (a name that refers to its multifunctionality), measuring 47.2 metres in length, with a beam of 8,440 metres, and a draft of 4,438 metres. She was built in 1965, and has a gross tonnage of 541 tons, with a deadweight of 315 tons.
It should be noted that the previously failed auction, this ship had a starting price of €180,000, as reported by malagahoy.es.