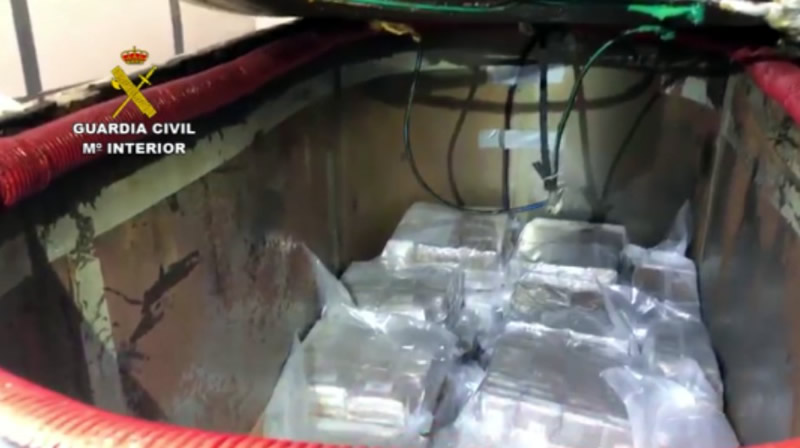 Guardia Civil officers in the province of Almeria have arrested nine people, and destroyed an elaborate operation by a criminal gang that was planning to transport 400kg of hashish using a clever concealment technique of placing the drugs inside the hollow structure of a high voltage electrical transformer that was thought to be prepared for transportation by road to a destination in Italy.

In a police press release, it is reported that the gang members, all of Albanian nationality, had connections with the Sacra Corona Unita, a notorious mafia organization from the Italian region of Puglia, and were operating out of the western region of Almeria.

It was the intervention of a smaller amount of 26 kilos of cannabis during a checkpoint on the A-92 that led to a police investigation being initiated when they got the hunch that there was possibly a powerful criminal operation at work behind the scenes, which eventually put officers on the trail of the gang that they have just dismantled.

A series of investigations uncovered information that a gang was indeed attempting to take over control of the illegal marijuana farmers of the entire western region of Almeria, who the investigators believed had “the necessary contacts to capture an important market share”.

It was soon learned that the leader of this criminal and had set up a centre of operations in a bar in the Almerian town of Vícar, from where he was allegedly continually dispatching his product to various parts of Europe, according to lavanguardia.com.

The Guardia Civil conducted a surveillance operation that eventually led them to an industrial warehouse in Vícar, where the gang members were apprehended whilst loading a heavy piece of machinery onto a lorry, which turned out to be the high-voltage electric transformer with the drugs neatly packed inside its hollowed-out guts, and saw the Guardia Civil dismantle the entire operation.