Hartlepool Monkey is not racist and doesn’t need explanatory plaque 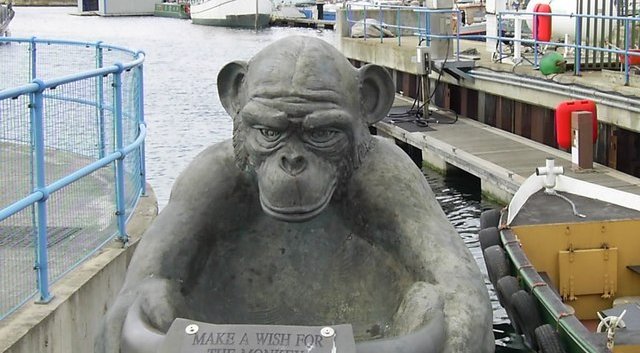 REPORTS that have appeared in the UK press concerning perceived problems with the Hartlepool Monkey have been dismissed according to the BBC asCouncil leader suggests that Hartlepool Monkey is not racist and doesn’t need explanatory plaque.

The story developed when The Telegraph said that the Hartlepool Council was considering adding an explanatory plaque to the monkey statue as it may offend some visitors by having possible racist connections.

It was then taken up by a number of sources including Sky News and Teesside Live so gained a great deal of local attention.

In fact, the story goes that during the Napoleonic Wars, a French ship was wrecked off the coast of an old fishing village on the north-east coast of England and the only survivor was a monkey that manage to get to shore.

Those living in Hartlepool had never seen a monkey or a Frenchman and as they couldn’t understand what it was saying, they assumed it was a French spy and hanged it.

There is no real documentation to prove this but it has been a local story since then and even the local football team has adopted H’angus the Monkey as its mascot.

Now, Councillor Shane Moore, leader of the Council has told the BBC that despite what some Council employees may have said, “no action needs to be nor will be taken”.

His later observations maintained that the Hartlepool Monkey is not racist and doesn’t need explanatory plaque as will be seen below;

He then turned to his Facebook page and wrote “On a day when we should be celebrating Hartlepool being awarded the full £25 million in Towns Deal money, we are instead talking about how a statue of a monkey needs a sign to prove it isn’t racist.

“I’m all for us explaining our history, culture and folk lore to people but ultimately not everything has to come down to race.”

One case of warning the press not to monkey about with history especially as the statue collected £2,000 last year!