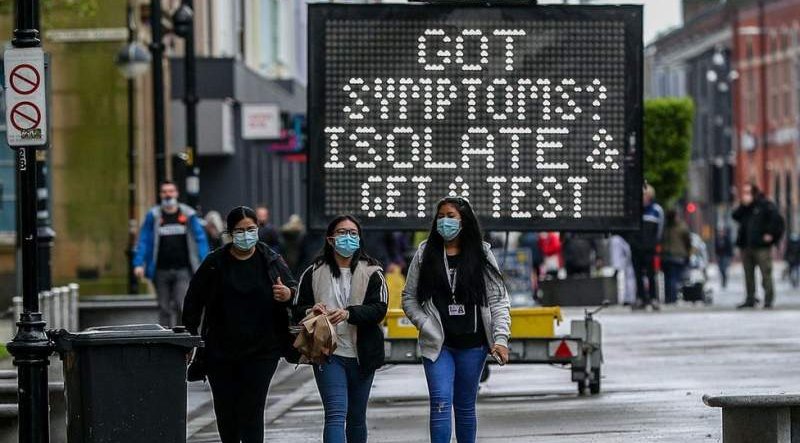 Six Million People Have Been Told To Stay Outdoors Over Concerns Of Indian ‘Delta’ Variant In North West England.

ALMOST six million residents in the north west of England were yesterday (Tuesday, June 8) told to meet other people outdoors in a bid to curb the spread of Covid’s Indian ‘Delta’ variant.

Health Secretary Matt Hancock said restrictions currently in place in Bolton would be expanded across the rest of Greater Manchester and Lancashire due to concerns about the variant which is said to be more infectious.

People are being urged to avoid meeting others inside where possible, cut back on travel in and out of the region and maintain social distancing.

Military support will be given to the 22 councils in the region to help with Covid testing and health chiefs will have the power if it is necessary to enforce mandatory face masks in secondary schools. Local leaders last night insisted the measures do not amount to a north west lockdown, but more an intention to give ‘guidance and advice’ for residents.

Health Secretary Matt Hancock said a “strengthened package of support” would be provided to boost Covid vaccinations and testing and will include military support and supervised in-school testing in the areas hardest hit.

He told the Commons: “We know that this approach can work. We’ve seen it work in south London and in Bolton in stopping a rise in the number of cases.

“This is the next stage of tackling the pandemic in Manchester and Lancashire and, of course, it’s vital that people in these areas, as everywhere else, come forward and get the jab as soon as they are eligible because that is our way out of this pandemic together.”

He added: “We face a challenging decision ahead of June 21. These are difficult judgements.”

Greater Manchester and parts of Lancashire have been identified as places where the so-called Indian variant, now named the Delta variant by the World Health Organisation, is spreading the fastest.

As part of the government guidance, residents are also being encouraged to get tested twice a week and continue to work from home if possible.

Schools have been told they can also reintroduce face coverings in communal areas if advised to do so by directors of public health.