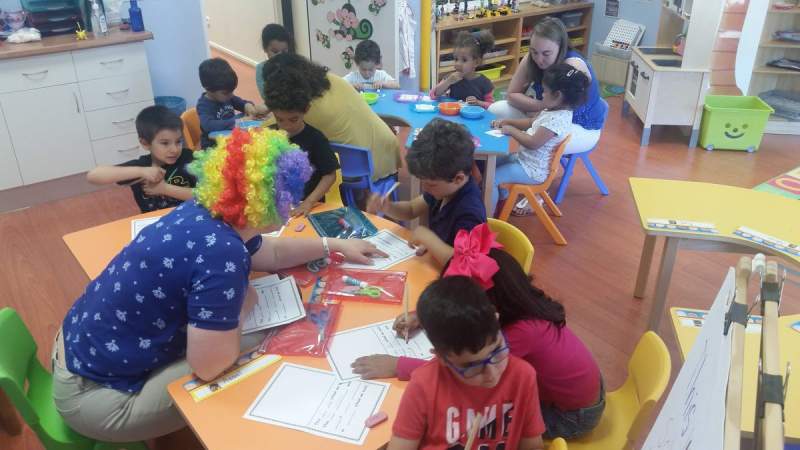 Vélez-Málaga has carried out improvements in schools valued at 311,000 euros. Image: Twitter

Velez-Malaga improved schools in the municipality last year to the tune of 311,293.50 euros, financed by the Programme for the Promotion of Agricultural Employment (PFEA) 2020, which employed a total of 160 people. The Mayor of Vélez-Málaga, Antonio Moreno Ferrer, and the Councillor for Education, Lola Gámez, paid a visit to the CEIP La Gloria facilities to review the progress and to announce future enhancements to the municipality’s public schools.
In the instance of the CEIP La Gloria, the efforts included the replacement of the old gravel playground in the infant education area with a concreted area equipped with rubber tiles for children’s play. Additionally, 35,680.41 euros have been invested in the replacement of the perimeter fence. The CEIP Romeral invested 38,226.88 euros to build a tiled baseboard in the porch and infant education corridor, while the CEIP Axarqua invested 13,877.31 euros to renew the concrete paving of the center’s entry area. The largest action was performed at the CEIP Juan Herrera Alcausa (Los Olivos), where the perimeter wall was repaired after being seriously damaged by ground deformation that jeopardized its stability, repairing both the work wall and the area of metal fencing on the wall, totaling 223,508.90 euros.
The Mayor of Velez-Málaga, Antonio Moreno Ferrer, explained that the government team “considers the welfare of our children a priority and believes it is critical to work to ensure their safety and provide them with optimal educational conditions; as a result, we are extremely pleased to have fulfilled many of our commitments to schools and to have completed these works, thus meeting a significant demand of the community.”
Additionally, Moreno Ferrer emphasized the relevance of these programs for the generation of wealth and employment in the municipality, noting that the completion of these projects resulted in the creation of 160 jobs for 140 laborers and 20 officers.
Lola Gámez revealed that initiatives worth 341,040.37 euros are being carried out for processing by the Provincial Council and the SEPE (State Public Employment Service) under the new Programme for the Promotion of Agricultural Employment (PFEA) of 2021. 341,040.37 euros for additional necessary upgrades to the CEIP Axarqua and Juan Herrera Alcausa (Los Olivos), as well as the CEIP Custodio Puga, Augusto Santiago Bellido (Reidero), and Torrejaral in Valle-Niza. On this occasion, a total of 173 individuals will be offered employment; 150 will be hired as laborers and 23 will be hired as journeymen.
Gámez remembered that the Junta de Andaluca, the competent education administration, has yet to complete some projects in Vélez-Málaga that have been planned and budgeted for some time, such as completing the removal of asbestos still present in some schools.
The Programmes for the Promotion of Agricultural Employment (PFEA) are a significant joint investment made by the Town Hall of Vélez-Málaga in collaboration with the Junta de Andaluca and the Diputación de Málaga, which enables the municipality to carry out various infrastructure-related actions, such as educational, road, sports, and rural roads, among others, in order to respond to citizen needs.
As reported by Axarquia Plus