As Trent Alexander Arnold enhances his vision, he misses Euro 2020 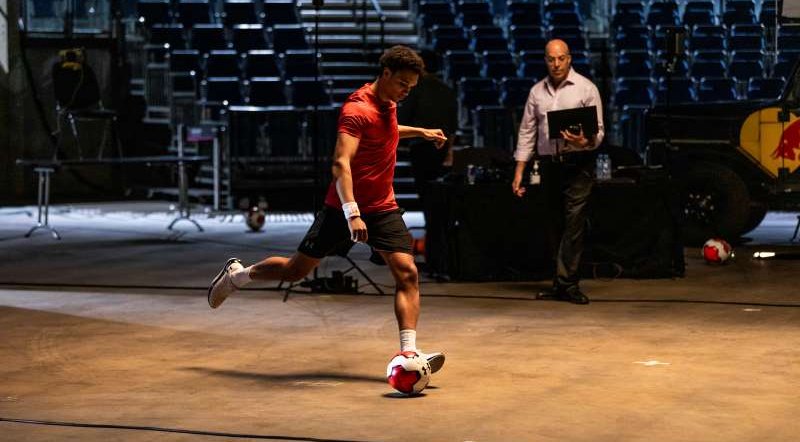 AS Trent Alexander Arnold enhances his vision, he misses Euro 2020 competition due to injury just as he was ready to return to match fitness.

The England and Liverpool FC footballer has been working with Red Bull and world-renowned ophthalmologist Dr. Daniel Laby to enhance his vision as a split second can make all the difference.

The defender has seen vast improvements – notably in visual concentration, target tracking and processing which will allow him to trust his vision even more on the pitch

Two years on from one iconic night in Europe, the full-back – who is one of the brightest stars in football – has been taking his game to the next level by working with Red Bull on his vision ahead of a huge summer of sport and this is available to view as a video.

From neuro-tracker testing to picking out passes in virtual reality, viewers will be able to get an unrivalled insight into the body and mind of one of the world’s best young players as he continues to hone his craft.

To help guide Trent, Red Bull enlisted the support of Dr. Laby, who is the Director of Sports and Performance Vision at SportsVisionNY.

The New York-based doctor started his work in sports vision more than three decades ago and has since gathered a database of several thousand professional and Olympic-level athletes.

Following initial testing, Trent then underwent a bespoke six-week training programme devised by Dr. Laby which was completely tailored to Trent and designed to give him a fresh perspective on how he uses his eyes on the pitch.

The improvements in his eyesight have been tangible – noticeably he now has sharper vision (up by 44 per cent), has increased his visual concentration and multiple-object tracking ability (up by 241 per cent), and has quicker reaction and processing time (36 per increase) meaning he now has perfect 20:10 vision.

Reflecting on the opportunity, Trent commented: “I’m always looking for new ways to train and improve my game, so when Red Bull came to me with this opportunity I said yes immediately. Marginal gains are huge in any sport, especially football, and when you’re competing against the world’s best players, even a one percent improvement can make a huge difference.”

Trent who is more than happy to react with the media on a one-to-one basis was available for a short question and answer session which revealed some of his favourites in sport and his views on the improvement of his eyesight.

Q: What is it that you made you want to work with Dr. Laby on your vision?

I was really interested when I started to talk to Red Bull about the project as my vision isn’t an aspect I’ve worked on before. I don’t think anyone in football has fully, so it was an opportunity I couldn’t pass up.

Q: What’s been your biggest take-away from the experience?

I’ve been doing training on things like multiple target tracking, timing, multitasking, and contrast sensitivity [as well]. I’m sure everything has had a positive impact on my game but the biggest thing I would say is the multiple target tracking. It makes the most sense, focusing on one point and being able to see things that are going on around you and kind of spotting the red dots, which will be my teammates on the pitch.

Q: Why are marginal gains so important in football?

Marginal gains are huge in any sport, especially football. In a field that’s so tight and so heavily contested with amazing athletes and brains, it’s important to find the little ‘one percent-ers’ that other people aren’t doing, and I think we’ve definitely found one here.

Q: What do you think makes the perfect pass and what’s your favourite assist to date?

For me, it would be vision, execution, timing, weight of pass, distance, strength, technique. [I’d say] at home against Bournemouth, 17/18 season.

Q: Who are your favourite passers in the game?

I look up to Messi and De Bruyne in terms of passing in football.

Q: Is there anyone in the Liverpool or England squad who you most admire for their overall vision?

I admire Thiago’s vision. In the England team, a great passer would be Phil Foden. Harry Kane is a very good passer of the ball.

Q: Who is the best player to pass to in Liverpool and England?

The best player to pass to is Bobby Firmino. He’s got a touch like an angel so doesn’t matter how you give it to him! Again, I’d probably say Phil Foden is the best at England to pass to. Amazing, delicate touch.

Q: Could you pick your dream five-a-side team based solely on vision?

Q: You’ve mentioned before that Steven Gerrard was an idol. Can you pick out what made him so good?

I think what made Steven Gerrard so good was decisiveness, if that makes sense. He never did anything just for the sake of it. I he did it with a purpose and did it with intensity. So, I would say decisiveness.

Q: Do you think VAR has meant that everyone has to be a better passer?

Yeah, I would say since VAR there’s definitely been a need to make the pass a little bit more perfect in terms of weight and timing. It’s more timing than anything – it puts an emphasis on timing.

Thank you for reading ‘As Trent Alexander Arnold enhances his vision, he misses Euro 2020.’