Man Who Assaulted President Macron Gets Slapped With 4 Months’ Jail 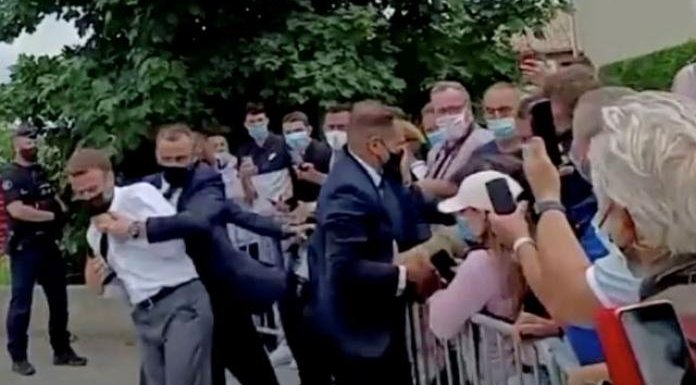 Man Who Assaulted President Macron Gets Slapped With 4 Months’ Jail.

A court in France sentenced a man who slapped French President Emmanuel Macron across the face this week to a prison term of 18 months, 14 of which were suspended, on Thursday, June 10.

Damien Tarel, who was revealed as a 28-year-old medieval history enthusiast, had been in custody since the assault on Tuesday, June 8, which a prosecutor called “absolutely unacceptable” and “an act of deliberate violence”.

Tarel was placed under arrest after receiving the verdict from the court in the southern city of Valence. he will spend the night in jail as he begins his sentence. The court followed a recommendation in its verdict from prosecutors for an 18-month sentence but said he should serve only four, after a fast-track hearing.

The long-haired history buff and board games enthusiast told investigators that he “acted instinctively and without thinking” after waiting for Macron outside a school in the village of Tain-l’Hermitage.

Tarel said that several days ahead of Macron’s visit to the region, he had thought about throwing an egg or a cream tart at the president, but added the slap was not premeditated.

“I think that Macron represents very neatly the decay of our country,” he told the court, according to BFM TV. “If I had challenged Macron to a duel at sunrise, I doubt he would have responded.”

Tarel faced a charge of assault against a public official, an offence that carries a maximum sentence of three years in jail and a 45,000-euro fine. President Macron shrugged off the assault, calling it an “isolated event”, and made a promise to continue meeting voters despite concerns for his personal security.

When the French President was asked about it again during an interview on Thursday with BFM TV, he called it a “stupid, violent act” and suggested it was a consequence of the poisonous atmosphere found on social media.

“You get used to the hatred on social media that becomes normalised. And then when you’re face-to-face with someone, you think it’s the same thing. That’s unacceptable,” he said.