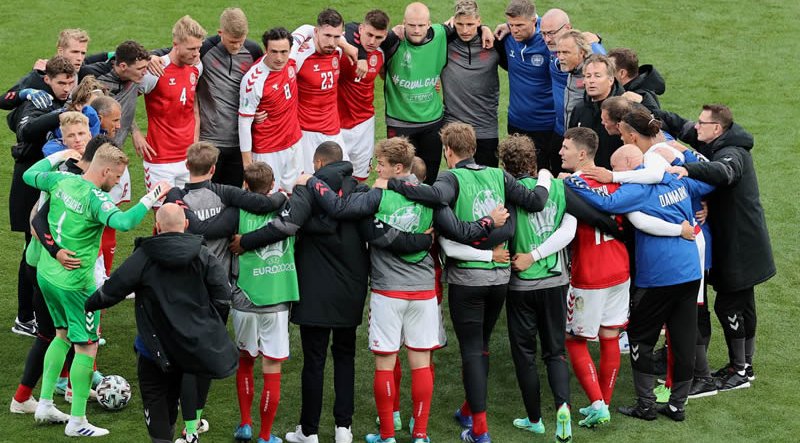 EURO 2020: First Upset Of The Tournament As Finland Beat Denmark in Copenhagen

Finland sprung the first surprise of the Euro 2020 tournament – playing in a major international tournament for the very first time – as they beat Denmark 1-0 today, Saturday 12, in their Group B match in the Telia Parken Stadium in Copenhagen, with a crowd of 15,200 football fans not realising what they were about to witness.

Football really played a secondary role in this encounter, after an awful incident involving Inter Milan’s Danish midfield creative genius, Christian Erikesen, who suddenly dropped onto the pitch in the 40th minute, for no apparent reason, causing the match to be halted for a lengthy period of time, while medics worked to revive him, with initial reports suggesting the player had suffered a heart attack on the pitch.

The Danish FA has since made a statement saying that 29-year-old Eriksen is conscious, and ‘stable’, in hospital, and the match resumed at 7.30pm, having been halted at 5.43pm, with both sets of players reportedly requesting to continue.

After the long delay, the remaining five minutes of the first half were played, and then a short five-minute break, before resuming with the second 45 minutes.

Finland took the lead really against the run of play, with their first attempt on goal, when, in the 60th minute, Joel Pohjanpalo got his head to a cross from Genk full-back Jere Uronen, and Leicester City’s Kasper Schmeichel somehow let the ball slip through his hands and into the net.

With 18 minutes left on the clock, Paulus Arajuuri clipped Poulsen and English referee Anthony Taylor pointed to the penalty spot, but Finland keeper Lukas Hradecky guessed which way Tottenham’s Pierre-Emile Hojbjerg was going to go, and made what turned out to be an easy save, which earned the Finns a full three points.

Following the request made by players of both teams, UEFA has agreed to restart the match between Denmark and Finland tonight at 20:30 CET (TBC).

The last four minutes of the first half will be played, there will then be a 5-minute half-time break followed by the second half.