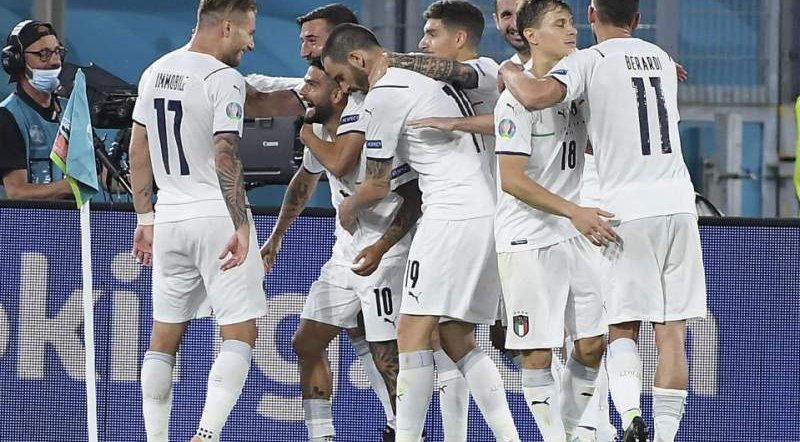 Italy Kick’s Off The Euro 2020 With A Convincing Win Over Turkey.

Italy kicked off The Euro 2020 in the capital city of Rome, the national stadium, which with a restricted capacity due to covid rules, was only a quarter full. However, Turkish and Italian fans present at the match added to a sense of celebration at the start of Europe’s biggest football carnival which had been delayed a year due to the coronavirus pandemic.

Tickets sales reported 16,000 seats had been sold and inside the ground, the biggest crowd in Italy for a year and a hall had assembled. Those unable to buy a ticket watched the action unfold on big screens set up all across Rome. It was a warm and balmy night and the medditerean breeze that blew across the city added to the atmosphere- it was going to be a special night for many reasons.

Euro 2020 was finally underway, and Italy was back, three decades after it last hosted a major tournament, five years after they last competed in one, 15 months after this fixture was postponed due to a crisis not seen by the current generation before.

Roberto Mancini’s side had been frustrated by Turkey’s defensive approach in the first half but broke through in the 53rd minute when a hard-hit cross from Domenico Berardi flew in off Turkey defender Merih Demiral for an own goal.

The Azzurri, now unbeaten in 28 matches, doubled their lead in the 66th when Leonardo Spinazzola’s drive was parried by Turkey goalkeeper Ugurcan Cakir but Immobile reacted well to slot home the loose ball.

Insigne made it 3-0 in the 79th minute with a confident, curling finish after some sloppy defending from the disappointing Turks.

After their absence from the 2018 World Cup finals, Mancini’s Italy rebuild looks promising. This was their 28th straight game without losing, which comes close to the national team’s record of 30 that has stood since the 1930s.

They are not an outstanding proposition man-for-man when compared to some of the other big European nations but as a side with a shrewd approach, they will be difficult to beat. “We produced an excellent performance,” Mancini said later. “We didn’t allow Turkey to play. They are not a weak side. They have great players.”