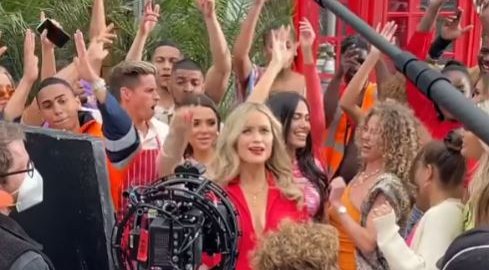 Laura Whitmore Promotes Love Island On Street Were Man Was Stabbed.
Laura Whitmore promotes Love Island on street were man was stabbed only hours before the filming began.
In a bid to promote Love Island which is expected to be filmed in Spain’s Mallorca, Laura Whitmore had been filming, but on a street where sadly a man was stabbed only hours before filming began. Laura was filmed wearing a skin-tight one-piece in red for the Love Island promotion.
Fans of the show though had no idea that only hours before filming began an actual emergency had occurred on the street at the Thames View Estate in Barking, East London. Shortly before cameras started filming a 20-year-old man was attacked and stabbed. The incident occurred on May 10 according to the Mirror.
According to reports police attended the scene of the incident after being called to the scene of a stabbing. An unnamed victim was found with stab wounds in both his shoulder and also in his back. According to the Met police, the man’s injuries were considered “non-life-threatening and non-life-changing”. He was rushed to hospital in order to be treated.
Love Island crew turned up to film the promo with a giant pink flamingo and even palm trees in tow.
In other Love Island news, Ex on the Beach’s Jess Impiazzi has recently warned Love Island stars off having sex on the show which is filmed in Spain’s Mallorca.
Jess Impiazzi, the former reality star came to regret the fact that she had sex on TV. She has now warned the next crop of contestants for Love Island they should not follow suit.
Jess starred in Ex On The Beach in 2015 and in a drunken event was recorded having sex with Rogan O’Connor. She has now spoken out to say that this could have, and nearly did ruin her Hollywood career.
Jess is now 31 years old and she explained how she had previously begged producers not to air the footage of the pair. Speaking to The Sun she commented that: “I completely regret it, there are things in my life where I would love to take an eraser and wipe away but I can’t.
She went on to add that: “You’ve got to remember that this doesn’t go away, papers don’t go away, articles online are there forever, repeats are there forever – you’ve got to make sure you’re comfortable with that.
She has now spoken out to warn Love Islanders that the show could make them very famous but they could soon be replaced the public’s eyes as soon as the next series airs.