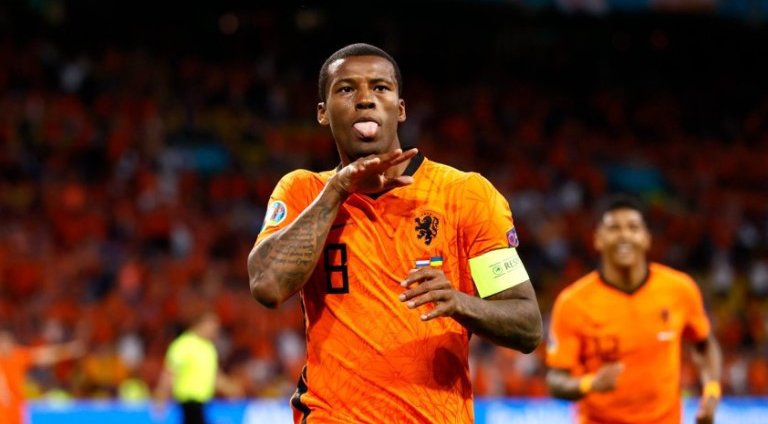 The Netherlands and Ukraine kicked off their European Championships campaigns today, Sunday 13, in the Johan Cruyff Arena in Amsterdam, in front of 15, 837 football fans, who were lucky to have witnessed the best match of the tournament so far.

Holland manager Frank De Boer didn’t enjoy the best of times during their qualifying matches, and just twelve months into the job he really needs to take his team a long way in this tournament, to prove to the fans that he is the right choice for the position.

Everything looked to be going so well for the Dutch as they sailed into a two-goal lead, with their captain – who this week signed for PSG in France – Georginio Wijnaldum, putting them in front on 52 minutes, before that lead was doubled by Wolfsburg’s Wout Weghorst six minutes later, and it looked like the men in orange would win comfortably.

Ukraine had other plans though, as West Ham’s Andriy Yarmolenko struck a beautiful left-footed shot into the top of the Dutch net from outside the box on 75 minutes, to set up an exciting last 15 minutes, only for Atalanta’s Ruslan Malinovskyi‘s free-kick to be headed home four minutes later by Roman Yaremchuk, to really put the pressure on De Boer and his team.

Thankfully, Manchester City’s Nathan Ake was on hand with a perfect cross to the head of PSV player Denzel Dumfries on 85 minutes, which saw the Netherlands survive, and the three points were in the bag for them, now they have Thursday to look forward to, with Austria – who beat North Macedonia 3-1 today – visiting Amsterdam, while the Ukraine squad travels to Bucharest to take on North Macedonia.