President Biden Has Tea With The Queen At Windsor Castle 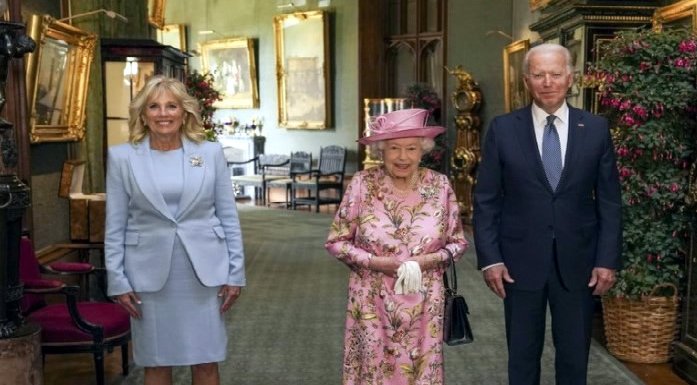 US President Joe Biden and First Lady Jill Biden were welcomed to Windsor Castle this afternoon, Sunday 13, with a celebratory Guard of Honour to meet them on their arrival at the Queen’s Berkshire residence, one day after her official birthday.

Even in the day’s sweltering heat, Her Majesty the Queen stood elegantly, waiting to welcome her special guests – who had been in Britain attending the G7 summit in St Ives, Cornwall – wearing a summery pink coloured outfit, complete with the Jardine star brooch that is believed to be one of her favourite items of jewellry, and she was even seen smiling at her guards as they all waited, according to The Sun.

Stepping out of a Land Rover and holding her husband’s hand as they walked towards the castle, Jill Biden looked resplendent in her light blue suit, before stepping onto a dais in the quadrangle of Windsor’s grounds, with the Biden’s seen with their hands on their hearts as a Guard of Honour – formed of The Queen’s Company First Battalion Grenadier Guards – played the American national anthem, and gave a royal salute.

Removing his aviator sunglasses, the president conducted an inspection of the royal guard, after which a military march-past took place in their honour.

Her Majesty had already met the Bidens at the Eden Project in Cornwall last Friday 11, where she had attended a reception for G7 the leaders, during which she is reported to have had the Bidens, and French President Emmanuel Macron in fits of giggles, when as they all posed for photos, the Queen joked, “Are you supposed to be looking as if you’re enjoying yourself?”.

Joe Biden becomes the fifth US President to have the honour of meeting the Queen, following Donald Trump in 2018, Barack Obama in 2016, and George W Bush in 2008, and Ronald Reagan back in 1982, and during her 69 years on the throne, the Queen has met 13 out of the 14 US presidents who have held office, the only exception being Lyndon B Johnson.