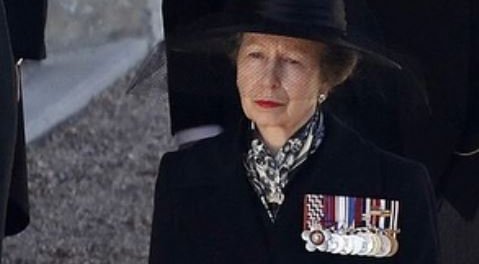 In what is Princess Anne’s first interview since the tragic death of Prince Philip, Princess Anne seemingly snubs an unwritten royal rule.

Princess Anne give her first interview since Prince Philip’s death when she spoke to ITV Royal Editor Chris Ship from Gatcombe Park in Gloucestershire. In the interview Princess Anne appeared to break an unwritten royal protocol.

She was caught out by viewers who noticed that the way she sat went against the unspoken royal rule on how the Royal family’s female members should sit, according to Gloucestershire live.

Viewers even took to Twitter to comment on how she sat, and one viewer tweeted that: “Princess Anne sitting like a normal woman with her legs crossed instead of the ridiculous ‘royal position’ of uncrossed.”

It is common to see female royals sitting in the “Duchess Slant” position. Speaking of the sitting position, etiquette expert Myka Meier spoke to People and explained how the Duchess slant means putting your knees and your ankles together. The legs are then slanted to one side and one’s hands are placed in their lap.

Meghan Markle has also been spotted sitting with her legs crossed, and even in the Queen’s presence. She was caught out an event in June 2018, when she sat down and naturally crossed her legs, before quickly switching positions, to the Duchess slant.

Princess Anne spoke of her father’s death and revealed how practical he was in life, and how this outlook shaped her childhood. She commented that: “If anything broke, there was always a thought of ‘have a look at this and see if you can mend it’,”

“He didn’t throw things away, and that often comes from your own family background. Anyone that goes through the Royal Navy training and spends such a long time on a ship, you have to mend and make do.