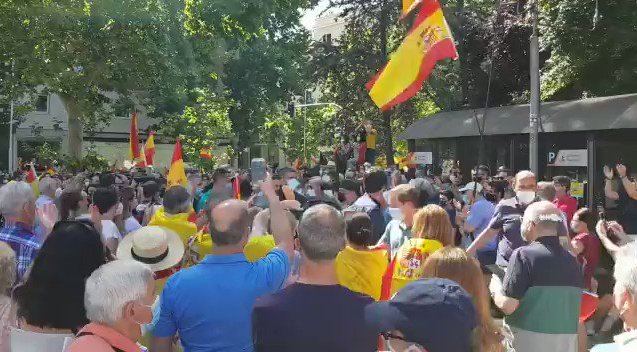 At east 25,000 people are at the Plaza de Colon to protest. Image: Twitter/ Vox

Thousands of demonstrators have gathered in Madrid to protest against proposed pardons for Catalan separatists. The government meanwhile has insisted the pardons are “coming” and “very soon”.

Demonstrations are underway in Madrid at the Plaza de Colon against proposed pardons for 12 Catalan separatists who were convicted after a failed 2017 independence bid. The protests, organized by the Partido Popular (PP), Ciudadanos (Cs) and Vox, are attended by approximately 25,000 people, according to Spanish media reports.

The pardons are widely perceived as a sop to Prime Minister Pedro Sanchez’s coalition partners in La Moncloa. The mooted pardons are highly unpopular across the political spectrum, including with Sanchez’s own party, the PSOE.

Speaking at the protest, the leader of PP, Pablo Casado, called on Prime Minister Sanchez to “respect national unity, the Constitution that he has promised to defend and to defend the equality of Spaniards and justice.”

He added Sanchez should “look Spaniards in the face and explain why he wants to steal a part of their nation from them.”

The meeting is controversial for the PP. At a previous demonstration with Vox in 2019, photos of Casado and the leader of Vox, Santiago Abascal, on a shared platform seemed to confirm the conservative PP had lurched even further to the right as Vox gained ground nationally.

A number of PP regional leaders, including the President of Andalucia, Jaunma Moreno – who counts Vox among his coalition partners in Sevilla – are not attending the protest in Madrid amid concerns another botched photo opportunity with Vox could damage their standing with voters.

Speaking at the Plaza de Colon today, Abascal said, “It is very important that on a day like today all Spaniards are together in this Plaza de Colon which we return to again without fear or shame of any kind of photo.”

Sanchez’s government is hostage to “totalitarianism, communism, separatism and terrorists,” he added.

Ines Arrimadas, the leader of the Cs, who also suffered fallout from being photographed with Abascal in 2019, told demonstrators at the Plaza de Colon, “We are here saying yes to justice, yes to democracy, yes to coexistence, yes to the whole of Spain and no to pardons.”

Meanwhile, Deputy Prime Minister Carmen Calvo told La Vaunagardia on June 13, a decision about the pardons will be reached soon and will be of “historical significance”.