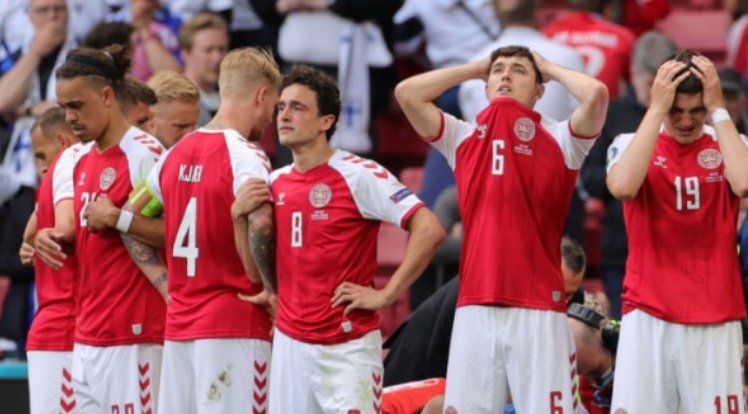 Claims That UEFA Threatened Denmark With Forfeit If They Didn't Resume The Match. image: twitter

Denmark and Manchester United goalkeeping legend, Peter Schmeichel – whose son Kasper was playing in goal for Denmark against Finland – appeared on Good Morning Britan today, Monday 14, and made some astonishing claims about UEFA’s stance after Christian Eriksen had collapsed with a suspected heart attack on the pitch, just before half-time in their Group B match against Finland on Saturday 12.

Danish team medics have since declared that Eriksen was ‘gone’ at one point, but that CPR efforts on the pitch thankfully brought him back, and the player is now awake and talking from his hospital bed, although the 29-year-old has been reported as wanting to discover exactly why he had collapsed the way he did.

When the match resumed after a long delay, UEFA had made the announcement saying that Eriksen had requested both teams to go back out and finish the match – which Finland subsequently won 1-0 – but Schmeichel claims UEFA threatened Denmark with forfeiting the match had they not resumed play, according to The Sun.

Speaking with GMB, Schmeichel said, “They said the players insisted on playing. I know that not to be the truth. Or that’s how you see the truth. They were left with three options. One was to play immediately and get the last 50 minutes played. The next one was to come in yesterday at 12 noon and finish the 50 minutes”.

Continuing, “And the third option was to forfeit the game and lose 3-0. So, you know, work it out for yourself. Is it the players’ wish to play? Did they have any choice really? I don’t think they had. And as you can hear from yesterday’s press conference, the coach seriously regrets putting the players back on the pitch”.

Kasper Hjulmand, the Danish coach was clearly upset at having to return to the pitch, saying in his press conference, “I think it was the wrong thing to make the decision between the two scenarios in this case. The players didn’t know if they lost their best friend and they had to decide whether to play”.

He continued, “I have a feeling we shouldn’t have played, to just get on the bus and go home and see what the next days brought. It was a tough message that the players had to try and make a decision. I have a sense that it was wrong the players were put in this situation. I am really proud to be the coach of a team that responded the way they did. Football showed its best face. Team spirit, compassion, and love are what football is really about”.

In response, UEFA said, “UEFA is sure it treated the matter with utmost respect for the sensitive situation and for the players.  It was decided to restart the match only after the two teams requested to finish the game on the same evening. The players’ need for 48 hours’ rest between matches eliminated other options”, adding later, “We can categorically deny that any team was threatened with a forfeit”.