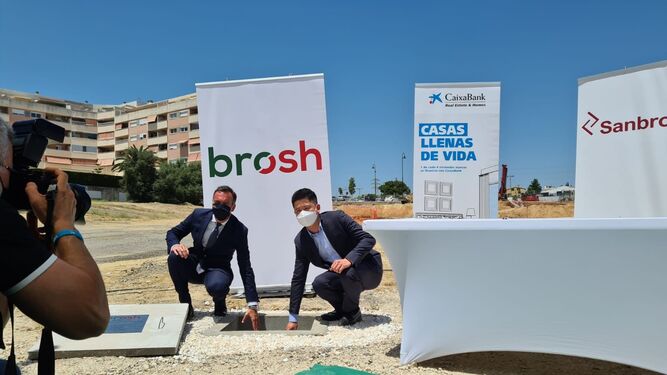 MADRID based Brosh developers have announced an investment of €60 million to build almost 400 homes in the town of Mijas, in the province of Malaga. It is an ambitious project that will be developed in several phases, each consisting of more than 50,000 square metres. The announcement was made on Friday, June 11, by Brosh’s promotions director, Carlos Martín.
The promoter was pictured laying the first stone of the ‘ SuiteMijas’ complex, a development in which ‘all the homes will have private terraces or gardens and in which the more than 4,500 square metres will include common areas equipped with swimming pools, children’s games, children’s climbing wall, sports areas, lounge areas and extensive covered and uncovered garden areas,’ said the company
During the speech, Carlos Martín said that a little over two years ago Brosh opted to expand its business outside the community of Madrid, “and we were clear about it, we wanted to grow within the Costa del Sol, with Mijas being our first destination,” he went on to say the area was very desirable and had great potential.”
Martin also pointed out that the Mijas municipality stands out for being one of the main golf practice centres in southern Europe and offers its citizens and tourists a great quality of life.
According to publicity from the company, ‘SuiteMijas’ has a great diversity of housing types, in which the balance between design and functionality has been taken care of and in which aspects such as natural light, ventilation, sustainability and respect for the environment are essential elements.
The first phase of the project will be carried out by the construction company Sanbro, in which more than 100 homes will be built – it is expected they will be complete by the second half of 2023.
The councillor for Urban Planning, Andrés Ruiz, pointed out that Mijas is now in the sights of important promoters and that this project proves it. The mayor also pointed out that this work “is one more example of the trust that investors have placed in Mijas.”
The developers themselves have 10 years of experience in the real estate sector, especially in Madrid, where they currently have almost a dozen promotions under development and more than 1,000 homes being built. The real estate development will be developed in several phases in an area of ​​more than 50,000 square metres each in the Las Lagunas area.