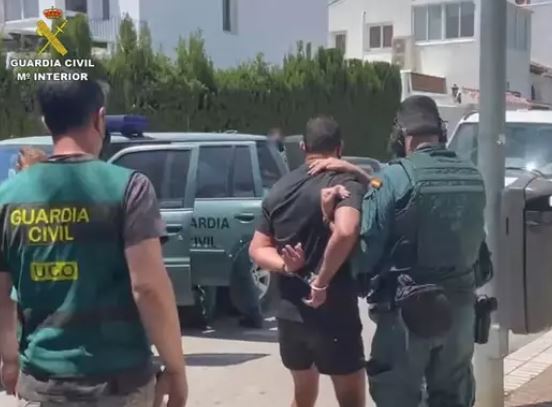 Dutch Organised Crime Leader Wanted For Five Years Arrested in Malaga.
A DUTCH organised crime leader who was wanted for five years after a DJ was mistakenly killed has been arrested in Spain’s Malaga on the Costa del Sol.
The Guardia Civil were able to arrest the Dutch organised crime leader in San Pedro de Alcántara in Malaga. The crime leader had been wanted for five years after he planned the death of a rival gang member. The hit went wrong though and they mistakenly managed to kill a well-known DJ from Amsterdam. The DJ had been staying in the same flat, as reported Europa Press.
The operation to arrest the fugitive was led by the Fugitives from Justice Team, who were also helped by the Rapid Action Group (GAR). They were able to discover where the Dutch fugitive was hiding even though security measures had been taken in a bid to stay hidden in Spain.
The man aged 40, known as NH had a European Arrest Warrant (EAW) in force due to his involvement in the 2016 murder in Amsterdam. The original plan had been to kill a rival gang member although the DJ was killed by mistake. He had been in the presence of his wife and daughter at the time of the attack and they were injured as well.
The fugitive’s location was established on May 23 after reports were received earlier in the year of a possible family reunion. The Dutch fugitive was seen to leave his residence surrounded by security measures including CCTV.
In partnership with the Dutch police he was placed at the disposal of Central Court number 2 of the Audiencia Nacional. The court decided that he should be sent to prison until his extradition could be organised.
Seven people had been arrested in connection with the 2016 murder of the DJ in Holland although the Dutch fugitive who masterminded the plan had been unaccounted for.