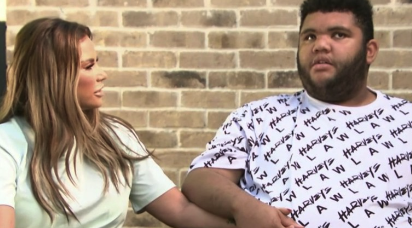 Former glamour model Katie, 43, and Harvey, 19, were appearing on the show to discuss their recent NTA nomination for the documentary, Harvey And Me, but the interview was halted when a light fixture fell onto the pair as they chatted.

Following the blunder, Harvey uttered: ‘What the f*** is that?’ with Richard later apologising, saying: ‘We just have to quickly say there was a little bit of inadvertent swearing earlier. It was completely inadvertent. Obviously, if you were affected by it, we apologise. But I think we can live with it.

Co-host Susanna Reid responded: ‘Was that you, Richard?’ with the star responding: ‘No it wasn’t me, although I have done that.’

A sniggering Katie said: ‘Oh did that fall down. Don’t worry, Harv. That’s live TV for you’ as a crew member quickly pulled the light back into it’s place.

Katie revealed that Harvey had refused to put an earpiece in, so therefore he couldn’t hear what hosts Richard Madeley and Susanna Reid were saying to him. However, the mum-of-five relayed their questions and comments to him, even telling him to stop using his iPad halfway through the interview.