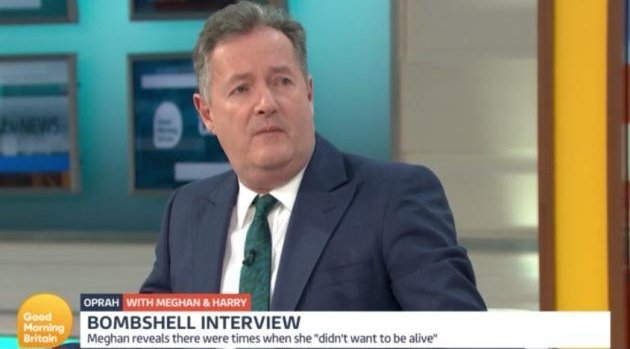 Piers Morgan has said he is willing to self-identify as a woman to get his old Good Morning Britain job back.

The morning show’s ratings have tumbled since Morgan stormed off the set in March following a debate with Alex Beresford over Meghan Markle’s interview with Oprah Winfrey.

After learning that the ITV show is looking for a female presenter to join Susannah Reid, Morgan wrote in his Daily Mail column he’s prepared to “appease the woke brigade”.

“Good Morning Britain’s tumbling ratings have plunged to their lowest-ever level as just 451,000 people tuned in to Wednesday’s show with comedian Adil Ray sitting in my old chair,” he wrote.

“If it appeases the woke brigade, I’m prepared to identify as a woman to get the ratings back to the peak of 1.9 million where I left them,” Morgan added.

Morgan left GMB after six years with ITV after he said he “didn’t believe a word” Meghan Markle had told Oprah Winfrey about her mental health in an interview.

An ITV spokesperson said: “Following discussions with ITV, Piers Morgan has decided now is the time to leave Good Morning Britain. ITV has accepted this decision and has nothing further to add.”

In a tweet on March 10, Morgan said that he had reflected on his opinion on the Oprah interview and still did not believe Meghan, adding that “freedom of speech is a hill I’m happy to die on”.

“Thanks for all the love, and hate. I’m off to spend more time with my opinions,” he added.