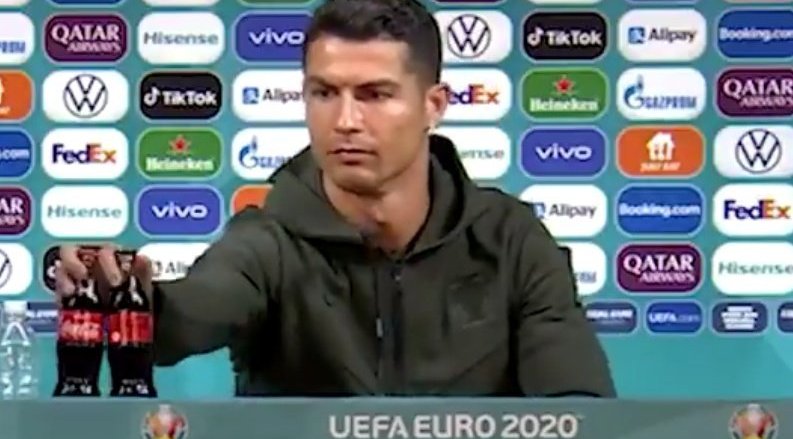 CRISTIANO RONALDO wiped $4bn – €3.30bn- off Coca-Cola’s market value after his press conference stunt. The Portuguese legend – who scored two late goals in a 3-0 win against Hungary – had told the watching world to ‘Drink Water!’ as he sat down to speak to the media and moved two bottles of the beverage out of the way of cameras and public view.

The Juventus forward had removed two bottles of the fizzy drink from the desk in front of him during his pre-match press conference ahead of their opening game win.

Coke has since issued a statement in response to CR7’s actions, saying “everyone is entitled to their drink preferences” and that everyone has different “tastes and needs”.

A spokesperson added: “Players are offered water, alongside Coca-Cola and Coca-Cola Zero Sugar, on arrival at our press conferences.” Ronaldo, 36, has a famously strict diet and avoids sugary foods, eating ‘clean’ up to six times a day to maintain his incredible physique while he ages.

While still at Real Madrid, the club doctor said he had the body of a player ten years younger and could continue playing at the top level into his 40s.

While the drinks company were trying to save face on Tuesday, Ronaldo was his typical self on the pitch against Hungary.

If anyone was in any doubt over the power of Ronaldo’s words and actions, they won’t be now, and this isn’t the first time Ronaldo has spoken out against carbonated drinks, he previously told the media of how he tries to avoid his son consuming them.