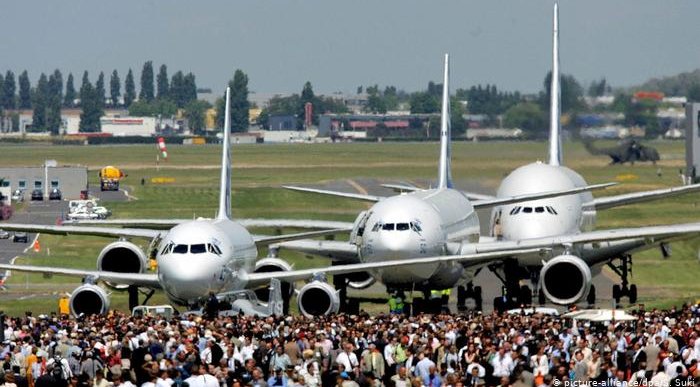 The United States and Europe are now accelerating efforts to reach a pact to end a 17-year-old dispute over the aviation industry-damaging aircraft subsidies, but both say they could be content with a longer truce in the recent tariff wars, according to a report from Bloomberg.

A deal that either ends or suspends the world’s largest business-to-business dispute would relieve hundreds of other industries affected by tariffs suspended in March. You face another trade war within weeks if there is no progress.

US Trade Representative Katherine Tai discussed the dispute on Monday before the US-EU summit in her first face-to-face meeting with EU colleague Valdis Dombrovskis. Tai is travelling to the UK on Wednesday, June,16.

The European Commission, which oversees EU trade policy, and the United States are keen to find a solution by July 11 when the current suspension of transatlantic tariffs is due to come to an end.

The two sides have been targeting a pair of treaties – one between the United States and European Union, the original parties, and another between Washington and London following Britain’s exit from the EU – on new ground rules for aerospace.

Barring a detailed accord, they could opt for a standstill agreement pushing back the resumption of tariffs by years, but no final decision has been reached, one of the people said who is involved in the matter.

The Chinese C919 passenger jet has been promoted as a rival to planes made by Boeing and Airbus. image: Comak

Trade experts say a deal to freeze the conflict over jet subsidies, some of which have been rescinded or wound down, would give both sides more time to focus on broader agendas such as concerns over China’s state-driven economic model.

The country’s medium and long-term economic plans include ambitious targets for the global expansion of its aviation and aerospace industries, but so far, the state-directed model, which relies on subsidies for domestic firms, has not made a significant impact.

The tariffs on billions of euros of goods were progressively imposed from 2019 after the United States and EU both won partial victories at the World Trade Organization over claims of unfair aid for planemakers Boeing and Airbus.

The dispute has dragged on since 2004 when the United States withdrew from a 1992 aircraft subsidy pact and took the EU to the WTO, claiming Airbus had managed to equal Boeing’s share of the jet market thanks in part to subsidised government loans.

The EU counter-sued over what it termed unfair R&D support and subsidised tax incentives for Boeing. In a potentially key breakthrough, the United States has watered down opposition to the principle of future public loans for Airbus but insists they must be demonstrably market-based and notified in advance, people familiar with the talks said.

However, hurdles remain over the extent to which that could effectively allow Washington to approve or block European projects, they added- with the EU vehemently opposing any U.S. veto. Even more critical is the benchmark to be used when deciding whether the interest on any future loans is market-compatible.

Under the 1992 subsidy pact, one-third of a project could be financed by direct government support such as loans and cleared indirect R&D support up to 4% of a company’s revenue.

One option is to revisit that framework with market rules replacing subsidy quotas and a new cap on indirect R&D support. None of the parties involved agreed to comment on the talks.

In December 2020, outgoing U.S. Trade Representative Robert Lighthizer told Reuters the U.S. and Europe should cooperate in opposing future aerospace subsidies used by China. The U.S. has floated a joint review of aerospace funding in non-market economies like China, two of the people said.

“There’s no question that the rise of China’s aircraft industry is on everybody’s proverbial radar,” U.S. Chamber of Commerce Senior Vice-President Marjorie Chorlins said on Monday, noting what she described as China’s “heavy subsidisation”.

Like the United States, the EU has sparred with Beijing on trade and security this year. But its 27 nations could struggle to agree on a common front on topics like aerospace.

Brexit has also further complicated negotiations. Britain and the United States came close to striking an aerospace agreement in December that could have forced the hand of Brussels in its own talks with Washington.

But it collapsed amid British concerns over jobs and was eventually overtaken by political distractions surrounding unrest in Washington in January, several sources said. A British official said a balanced deal had been out of reach at the time.

Britain’s ability to negotiate trade deals independently of the EU is central to its new “global Britain” stance. But its flexibility on Airbus is cramped by its role as one of four core nations involved in the planemaker, pre-dating its EU accession.

French planemaker Airbus, which has 14,000 staff in Britain, has made plain work could shift abroad if the UK turns its back on aerospace.