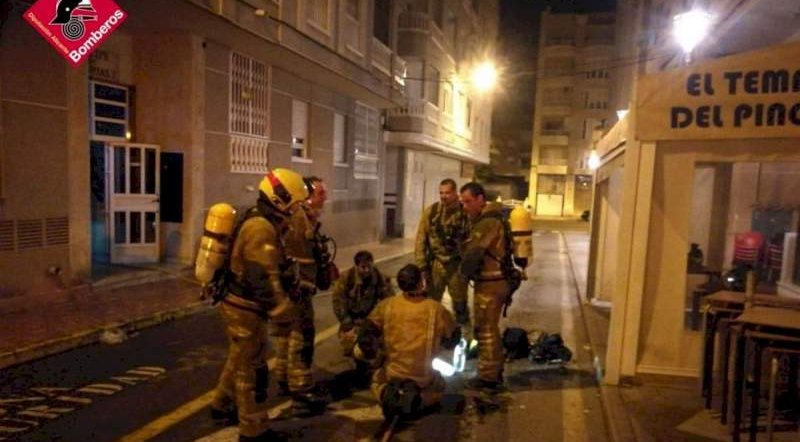 Baby And Young Child Injured In Torrevieja Fires.
A YOUNG baby and a seven-year-old child have been injured in fires in Torrevieja that occurred only hours apart from each other this morning.
Due to the two fires, multiple people required medical assistance early this morning as fires broke out in two Torrevieja homes. The fires broke out only hours apart from each other.
A seven-year-old girl was injured in one of the fires and suffered from a bruised leg according to sources at the Emergency Information and Coordination Centre. According to the Alicante Provincial Fire Brigade Consortium, a baby from one of the fires was also found to be suffering from smoke inhalation injuries.
The other people that needed medical assistance were a 38-year-old man who was suffering from smoke inhalation. He was discharged on the spot after he requested to be released from medical supervision. A further two adults, a man and a woman were also treated for smoke inhalation. In the end all three people were voluntarily discharged from medical care.
Only two fires broke out in the Valencia region overnight and surprisingly they were both in the same city and only occurred a few hours apart from each other.
The initial fire happened near midnight in Calle de los Gases, in Alicante’s Torrevieja. The cause of the fire was unknown but a first floor flat went up in flames. At this fire two people were treated for injuries, and one of them was the young baby. Both were treated for smoke inhalation. Damage occurred to the kitchen and bedroom, although no other people were injured during the fire.
The second fire began at about 4.30 in the morning. This fire occurred at Calle Arquitecto Larramendi. Due to the extent of the fire which occurred in the block of flats the entire building had to be evacuated. The block of flats saw three of the five floors become flooded with smoke and multiple people suffered from smoke inhalation injuries.