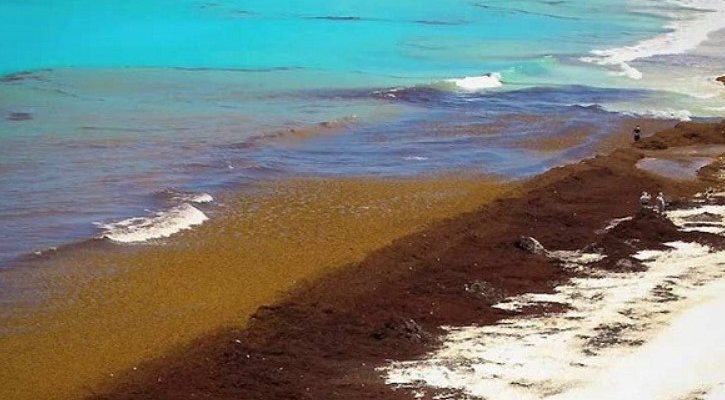 Parts of the beautiful coastline of the Costa del Sol are under attack, and being invaded by a threatening brown-coloured algae called ‘rugulopterix okamurea‘, which forms a type of thick blanket covering on the beaches, which can not be removed.
This algae arrives on our shores via the container ships that sail the seas from the Asian continent, carrying merchandise to Europe, but unfortunately, also importing these algae – which is indigenous of the Pacific Ocean – with them.
If you ask the local fishermen of the Strait of Gibraltar they will recoil in horror at the memory of when these same algae caused chaos in the Strait, and they will also recall how their nets became a total mess of sticky mass all caught up in them, and several bulldozers were having to go out every day to remove the invader from the beaches.
Scientists of the Aula del Mar marine education centre in Malaga once again discovered this invader on the beach near the Calaburras Lighthouse in Mijas Costa this Monday 14, with Juan Antonio López, the president of the Aula del Mar explaining to surinenglish.com, “This algae is very aggressive and difficult to eradicate. It is a danger to the local fauna and flora”.
Unfortunately for Spain, there are very few experts who know anything about this species, and it has hardly been studied, but it is known to be very aggressive, and Mr López has stressed that there really is no simple solution to it, pointing out, “Having been declared an invader, in theory, it cannot be touched. So we have no choice but to wait and see whether it disappears naturally in the next few days”.
With the marine biologist adding that the main risk is it could spread, warning, “we may be facing a major environmental problem”, something that would also be detrimental to tourism as the coast prepares for the arrival of its Summer tourism.