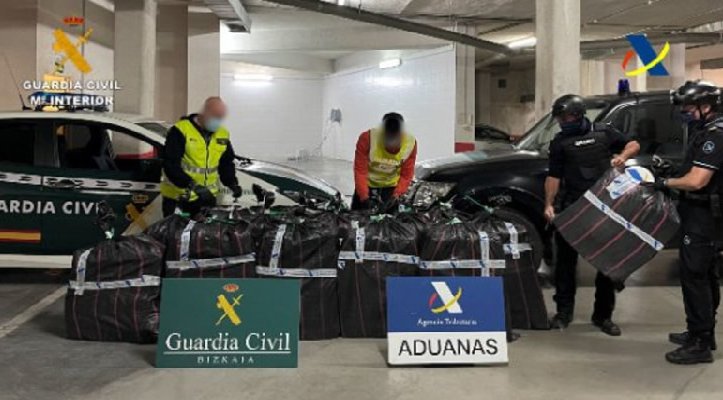 GUARDIA CIVIL Operations Seize 1,397 Kilos Stashes Of Cocaine In the Port of Bilbao

Guardia Civil officers, in a joint operation with the Tax Agency, have seized 1,397 kilos of cocaine in two consecutive operations carried out in March and May in the port of Bilbao, Northern Spain.

Officials from the Customs Surveillance Service of the Port of Bilbao, in conjunction with officers from the Guardia Civil’s fiscal reserve, seized the first stash of 185 kilos of cocaine at the end of March, and then again, during May, the second batch of 1,212 kilos, both hidden inside containers originating in South America.

In both cases, the containers were transferred to the Comprehensive Customs Recognition Center that the Tax Agency has in the customs area at Bilbao port, to carry out an in-depth inspection, after customs officers had detected irregularities.

As the merchandise was being unloaded, the existence of a series of undeclared bundles that resembled those used to transport narcotic substances could be observed, and inside, a large number of packages were hidden containing the substance that turned out to be cocaine.

The 1,397 kilos of product seized had a street value estimated at €86 million, and a source said investigations remain open, with future arrests not being ruled out.

At the same time, the Customs Surveillance Service of the Tax Agency has initiated investigations into money laundering, after recently obtaining good results between their officers and those of the Guardia Civil, with their intensified customs control mechanisms on imports of merchandise in the chain of international trade, with Spain known to be one of Europe’s main entry points for narcotics by sea, using ingenious methods like camouflaging the drugs within merchandise such as pieces of fruit, canned food or metal cylinders.

According to the European Observatory on Drugs and Drug Addiction, containers are one of the main maritime channels for the introduction of cocaine into Europe. It should be borne in mind that two-thirds of the cocaine seized on the continent have traveled by sea, as reported by h50.es.