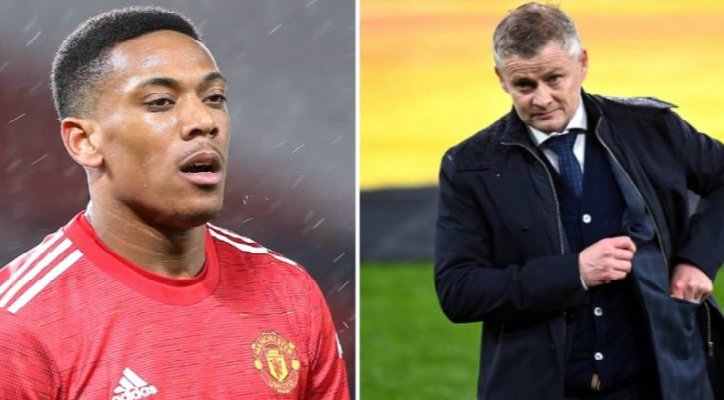 Manchester United have sensationally put their 25-year-old French star Anthony Martial up for sale, with reports saying that it came about because Red Devils manager, Ole Gunnar Solskjaer, was fed up with his attitude, which sources had described as being ‘terrible’, and it looks like he will be on his way out of Old Trafford this Summer.

Having scored only seven times in 36 matches last season, the Frenchman lost his regular spot to the 34-year-old Uruguayan hitman, Edinson Cavani, who had been bought in from PSG to try and raise the goal count at the Theatre Of Dreams, and his reward has been a new one-year extension to his contract, which would make Martial redundant probably anyway.

Duncan Castles, speaking on the Transfer Window podcast, said, “Anthony Martial is to be sacrificed should they get this new forward in. Solskjaer is tired of his attitude and hasn’t been impressed with his goal production and general knitting into the team this season”, and Castles also had a theory that Real Madrid had been offered a season-long loan for the player, with the option to buy, according to The Sun.

It has been public knowledge for most of last season that the United manager is on the lookout for a forward, with several names being bandied around, one of whom is Tottenham’s reported want-away England striker, Harry Kane, and there have been rumours doing the rounds that Martial could be offered to Spurs in a player-plus-cash deal.

Martial has missed out on the European Championships after suffering knee ligament injury while on international duty with France in March, which gave Real Madrid striker Karim Benzema the opportunity to be recalled by Didier Deschamps for his first international football since 2015.