Puppies Like Humans From The Moment They Are Born 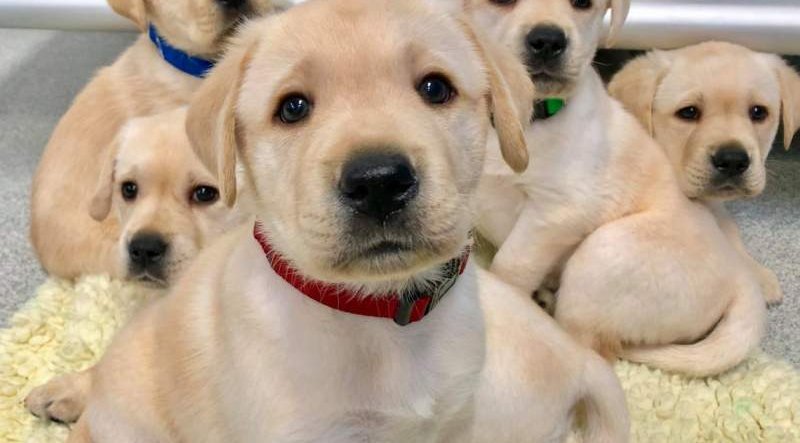 Puppies understand and like humans from the moment they are born, according to a new study by researchers at the University of Arizona.

The research shows that dogs are born with human-like social skills that allow them to communicate with humans from the get-go instead of having to learn how to relate when they are older.

Ninety-eight Labrador retrievers, 23 golden retrievers and 254 labrador golden crosses from 117 litters were part of the study.

Each one of them originated from a similar rearing history and pedigree going back several generations.

Researchers studied the dogs with a series of tests, looking at interactions between puppies and humans. One of the tests had the pups look for a hidden treat beneath one of the two overturned cups, after being pointed at by the researcher.

The pups would do this even after the smell was masked so the puppies would not just rely on just their noses.

Genetics may also help explain why some dogs perform better than others on social tasks such as following pointing gestures.

“There was evidence that these sorts of social skills were present in adulthood, but here we find evidence that puppies – sort of like humans – are biologically prepared to interact in these social ways,” said lead study author Emily Bray, a postdoctoral research associate in the University of Arizona School of Anthropology in the College of Social and Behavioral Sciences.

“People have been interested in dogs’ abilities to do these kinds of things for a long time, but there’s always been debate about to what extent is this really in the biology of dogs, versus something they learn by palling around with humans,” said study co-author Evan MacLean, assistant professor of anthropology.

At the time of the study, the puppies were still living with their littermates and had not yet been sent to live with a volunteer puppy raiser. Their interactions with humans had been limited, making it unlikely that the behaviours were learned, Bray said.

The researchers engaged the puppies in four different tasks. In one task, an experimenter hid a treat beneath one of two overturned cups and pointed to it to see if the puppy could follow the gesture. To ensure that the pups were not just following their noses, a treat was also taped to the inside of both cups. In another version of the task, puppies watched as the researchers placed a yellow block next to the correct cup, instead of pointing, to indicate where the puppy should look for the food.

The other two tasks were designed to observe puppies’ propensity to look at human faces. In one task, the researchers spoke to the puppies in “dog-directed speech,” reciting a script in the sort of high-pitched voice people sometimes use when talking to a baby. They then measured how long the puppy held a gaze with the human. In the final task – a so-called “unsolvable task” – researchers sealed a treat inside a closed container and presented it to the puppy, then measured how often the puppy looked to the human for help opening the container.

While many of the puppies were responsive to humans’ physical and verbal cues, very few looked to humans for help with the unsolvable task. That suggests that while puppies may be born knowing how to respond to human-initiated communication, the ability to initiate communication on their own may come later.

“In studies of adult dogs, we find a tendency for them to look to humans for help, especially when you look at adult dogs versus wolves. Wolves are going to persist and try to independently problem solve, whereas dogs are more likely to look to the social partner for help. In puppies, this help-seeking behaviour didn’t really seem to be part of their repertoire yet,” Bray said.

“If you think about language learning, children can understand what we’re saying to them before they can physically produce the words. It’s potentially a similar story with puppies; they are understanding what is being socially conveyed to them, but the production of it on their end is probably going to take a little bit longer, developmentally,” she added.

MacLean said the next step will be to see if researchers can identify the specific genes that may contribute to dogs’ capacity to communicate with humans.

“We’ve done some previous studies that show that dogs who tend to be successful as service dogs respond to people in different ways than dogs who aren’t successful,” MacLean said.

“If you could identify a potential genetic basis for these traits, you might be able to predict, even before the puppy is born, if they are part of a litter that would be good service dog candidates, because they have the right genetic background. It’s a long way down the road, but there is potential to start applying this,” he added.