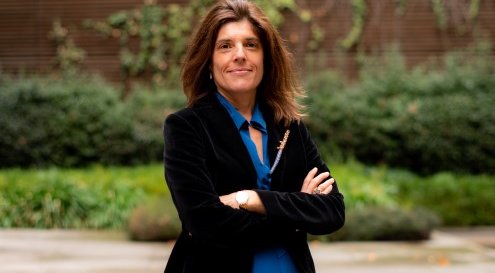 Spain has backed European cooperation with middle income countries and human development in the post-Covid recovery, at an informal meeting of European Union development ministers. The issues addressed were framed within the priorities of the Portuguese Rotating Presidency of the European Union.

European leadership in the international distribution of vaccines was defended at the meeting, in line with the principle of solidarity that governs initiatives to strengthen the health and education systems of the most vulnerable countries, and the recovery plans of emerging economies were addressed on June 14.

The State Secretary for International Cooperation, Angeles Moreno Bau, who took part by video-conference on behalf of the Minister for Foreign Affairs, Arancha Gonzalez Laya, stressed the need to support the recovery in middle income countries, in which inequalities and pockets of poverty have been exacerbated by the COVID-19 crisis. Moreno Bau underlined that these countries “are clear allies in achieving the 2030 Agenda, multilateralism and the Paris Agreement”.

The meeting, chaired by the High Representative of the EU for Foreign Affairs and Security Policy, Josep Borrell, and the European Commissioner for International Partnerships, Jutta Urpilainen, focused on forging partnerships with middle income countries – a broad category that groups together many Ibero-American countries and also includes emerging economies in Africa and Asia.

Collaboration with these States is sought through the new Team Europe approach, with the aim of placing all the tools at the service of the mutual benefit of middle income partners and of the European Union. Spain has proposed the creation of a new International Monetary Fund trust fund to act in these economies, and backed its incorporation in the moratorium and debt relief initiatives, with a particular focus on Latin America – one of the regions hardest hit by the pandemic.

In turn, Josep Borrell called to speed up the joint strategy to distribute vaccination doses. Along this line, the President of the Government, Pedro Sánchez, recently announced that Spain will donate 22.5 million doses through the COVAX international platform.

In relation to human development, the State secretary stressed the urgency of promoting the fight against hunger and malnutrition, which has suffered major setbacks as a result of the pandemic, and of attending to such key vectors as health and education. At the meeting, she particularly stressed the need to support the education sector – a priority sector of the new financing instrument of the European Union.

Moreno Bau also highlighted the crucial role that agri-food systems play in the conservation of biodiversity, soil, water and in the fight against climate change and rural poverty, and announced Spain’s candidacy, as a country strongly committed to this area, to chair the United Nations Committee on World Food Security for the two-year period 2022-2023.