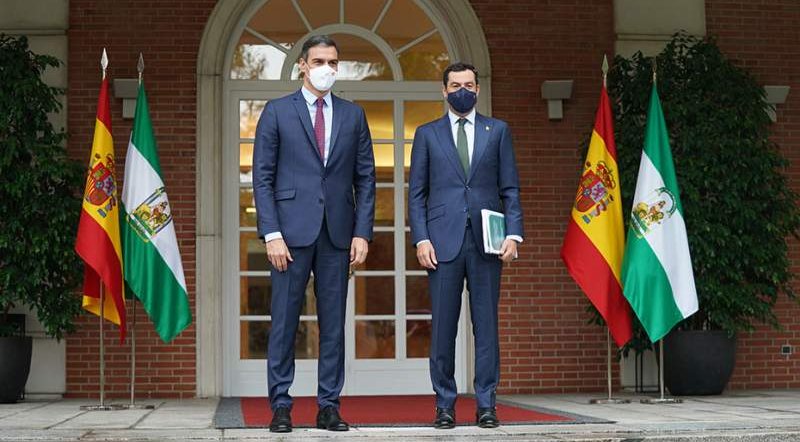 Andalucia has been short-changed by Madrid to the tune of €10 billion and nor did it get a fair amount of Covid funds, Juanma Moreno said. He is now insisting that €4.38 billion in EU Next Generation recovery funds be earmarked for the region.

THE President of Andalucia, Juanma Moreno, told President Pedro Sanchez during a meeting in Madrid on June 17 that an under-financing deficit of €10 billion should be corrected by a new regional financing model.

“Regional financing is one of the great problems of the country, and Andalucia particularly suffers as a result of this,” he said.

“European funds are an enormous opportunity to avoid the historical gap between some autonomous communities. If these funds are applied properly, equitably, responsibly and linked to the productive sectors and those that are a lever for change and transformation, we will be able to reduce that gap,” he added.

According to Moreno, Madrid has been owing money to Andalucia since 2009 at a rate of €4 million every day. The debt now stands at €10.8 billion, he said.

“That’s €9.65 billion that Andalucia stopped receiving between 2009 and 2021 due to the bad financing system and almost €1.2 billion of Covid funds,” Moreno said.

“Andalucia is a community that is in financial surplus. The government of Spain is being loyal to the communities. It is very difficult to have the whole territory in agreement. My idea is to reach an agreement if there is political will. There can be no a la carte system. This system penalises Andalucia or the Valencian Community or Murcia. But the new funds of €16,000 million that were delivered in 2020 because of Covid, have been distributed by population and in some way compensate for the under-financing situation,” she said.

Montero has also demanded that Moreno use his influence within the Partido Popular (PP) to seek an agreement on financing reforms within the party. Any change in the financing system has to be voted on as an organic law in Congress, and the ruling PSOE do not want to hold a vote on it if they do not first have guaranteed support from the PP.

The current Autonomous Financing Law was approved in 2009.