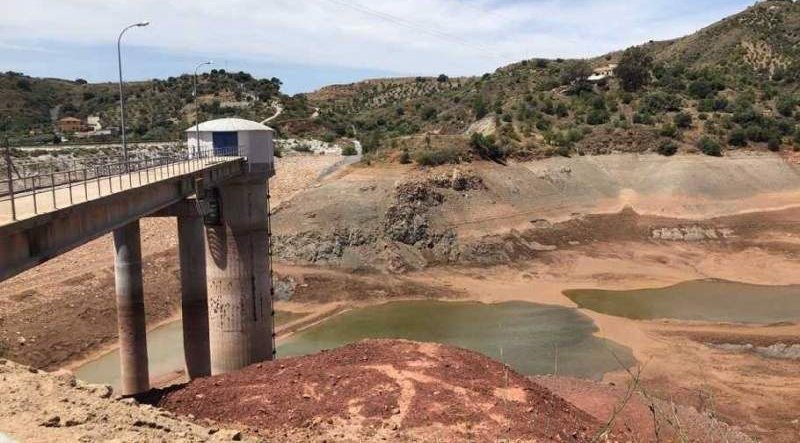 Malaga City Council Empties The Tomillar Dam For Maintenance Costing Around €400,000.
THE summer is upon us in Spain’s Costa del Sol so many people are wondering if it is a good time to be emptying The Tomillar Dam – but it has to be done. According to the Ministry of Works, demand for water in the region is soaring and the facility has to be able to supply the area with enough of the ‘precious liquid’ to cover the summer, which is forecast to be one of the hottest for years.
The councillor for Environmental Sustainability Gemma del Corral, together with the councillor for the Campanillas district, Ruth Sarabia, visited the maintenance work accompanied by the Emasa technicians and representatives from Aula del Mar, who have supervised the emptying of the dam.
There are a total of 14 different types of repairs and upgrades planned, with an estimated budget of €400,000, which include new facilities, such as the gates at the tail of the dam; improvements to the environment, the protection breakwater on the slope on the access road to the intake tower; and draft maintenance, such as cleaning the sludge around the bottom intake, changing the butterfly valves in the drain pipes, and inspecting the operation and cleanliness of the intake tower gates – all in all, a major project.
In addition, the incorporation of new technologies such as the placement of robotic cameras in the drain pipes or the topography carried out with drones is being considered.
The work is expected to be completed in three or four weeks, at which point the dam will be filled up again and it will be fully operational within two weeks, although it will not regain its normal capacity for seven or eight weeks.
It is the second time the dam has been emptied, which is necessary to undertake the improvement and maintenance work, since it came into operation in 1996, the last time this was done was in 2009.
The work has so far lasted around a month and, using supplies from other reservoirs, has avoided any waste of water while at the same time respecting and caring for the many species of animals and insects that inhabit the local environment.
Experts from the Aula del Mar will supervise the subsequent works until the filling of the dam with millions of litres of water is complete.