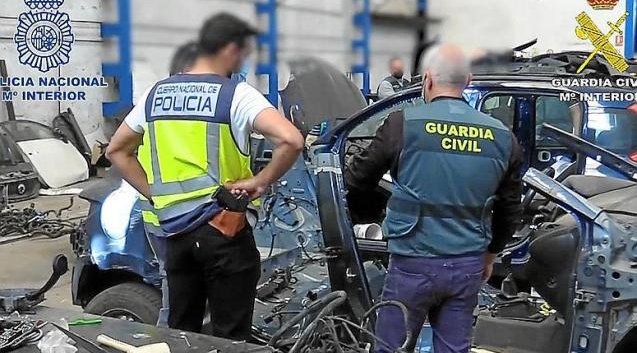 TEN people have been arrested in connection with the theft of high-end cars.

A joint operation with the Guardia Civil and the National Police led to the arrests, four of which were in Palma, three in Cordoba, two in Coruña and one in Valencia.
The gang bought damaged vehicles and stole similar cars, switching the number plates, chassis numbers and other documentation. The cars were then sold mainly abroad, however, most were sold in Spain.
Overall, 63 cars have been seized, as well as 45 number plates, documentation, false driving licenses, radiofrequency devices that are used to steal cars, a firearm, ammunition and computer equipment.
Two industrial buildings and nine homes were raided – the bank accounts of the victims have been frozen. Those arrested were of Spanish, Italian and French nationality, Majorca Daily Bulletin reports.
The news comes as National Police officers in Malaga have reportedly arrested two women, aged 20, and 26, of Croatian nationality, who they say are alleged members of one of Europe’s most active criminal gangs, specialising in breaking into, and stealing from, empty properties.
Officers had launched an investigation in the Malaga and Torremolinos areas after a sharp increase had been noticed in thefts from empty properties in those two particular zones, which is what led them to catch the two young women as they were making their getaway after raiding a house in the La Barriguilla district of Malaga capital, on June 5.

Their specialty for breaking and entering homes was the well-known ‘slip method’ where, after checking that nobody is home, a hard piece of plastic is pushed into the door jamb of a home’s front door to spring the latch, not leaving any sign of an actual forced entry.