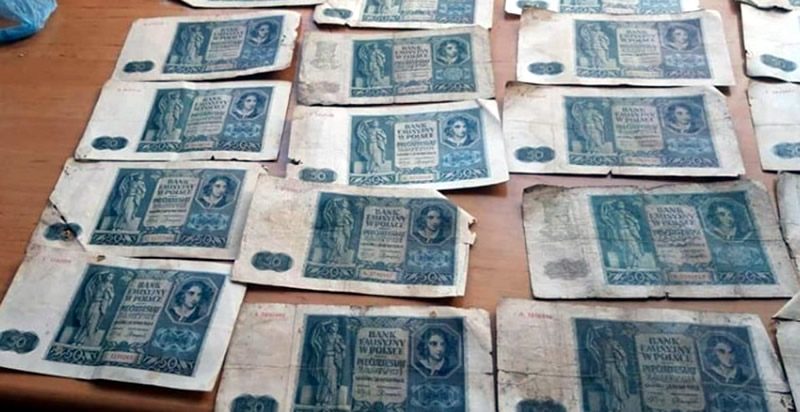 An unusual call from a woman to the Małopolska Historical Exploration Group in Poland, went, “Hello, my husband just dug up some cash in the barn”, which led to the story coming to light about a stash of Polish money – half a million zlotys – being uncovered in a barn by a farmer in Poland when he was in the process of demolishing it.

This pile of badly deteriorated money, hidden under a thick layer of hay in a barn outside the town of Krakow, is thought to have been hidden from the occupying Nazi forces in World War II, according to The First News.

The money was in denominations of 5, 20, and 50 zloty banknotes, which had been manufactured when the Nazis created the Polish Emissions Bank in 1940-1941, as verified by members of the Małopolska Historical Exploration Group when they arrived at the location to check this incredible find.

This group is a collection of history buffs and treasure hunters who had told The First News that the money was most likely hidden by Polish people at the farm to avoid it being taken by the Germans in one of their regular searches of properties, and so was very well hidden – hence it never being discovered for 70 years – as in the event of the money being found by German soldiers it would have meant a possible death sentence for the family who owned the farm.

Having lain hidden for that period of time, most of the notes were in a poor condition, although some were still remarkably well-kept, and to put into perspective just how much the stash of 500,000 zlotys was worth at the time it was hidden, in 1944, the commander of the Warsaw Kedyw would have earned 6,700 a month, or 80,400 a year, while ordinary civilians earned around PLN 100 per month.

As well as the banknotes, according to the Zawiadowca Historii blog, there was also a box containing documents relating to the person who hid the money, a member of the Polish National Army, also the grandfather of the farm’s current owner, and they believe the money was probably stolen in a raid on the Germans, with one expert explaining, “The partisans often used this method to obtain the necessary funds for their clandestine activities”.

Once the Russian army liberated Poland, the money became worthless, “The deposit has no material value, it is only a historical curiosity and an interesting memory of the time of the occupation”, said the expert, and the family will now keep the money as a souvenir, as reported by sevilla.abc.es.