Ten-Man Wales Lose To Italy But Qualify For Knockout Stage 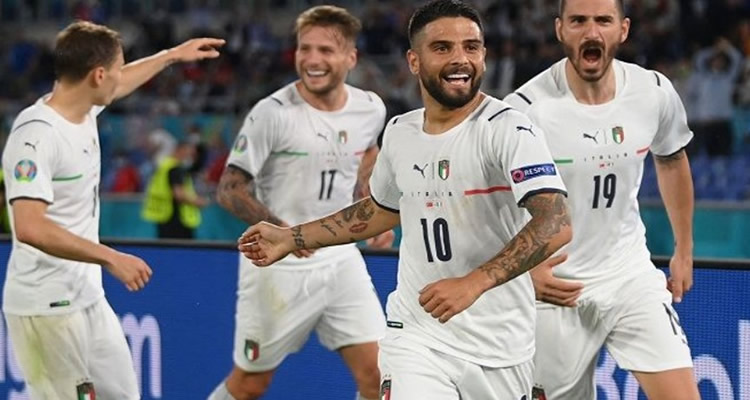 Wales travelled to the Stadio Olympico in Rome this afternoon for their final Group A match in Euro 2020, hoping for a result against the in-form Italians, with their rivals for the second spot, Switzerland, taking on Turkey at the same time in the Baku National Stadium, in Azerbaijan.

Playing the last 35 minutes with ten men after having Chelsea’s 20-year-old Ethan Ampadu sent off, getting a straight red card after appearing to stamp on the foot of Juventus player, Federico Bernardeschi, with the VAR confirming it, the Welsh clung on, in the hope that Turkey could do them a favour in Baku, which they did, as the Swiss ran out 3-1 victors, but ten-man Wales have the better goal difference.

Italy had scored six goals in their last two matches, with Roberto Mancini making eight changes to his starting eleven, showing the great depth of talent he has available in his squad, and they had to settle for the one solitary goal from Matteo Pessina, hooking in a Marco Verratti free-kick after 39 minutes.

In all fairness to Wales, they gave Italy a good test, and the players can hold their heads high, as they progress to the knockout stages, where they will play in Amsterdam next Saturday 26, against the runners-up from Group B, which could be one of Finland, Denmark, or Russia, which is not such a bad situation for the Welsh to be facing on paper at least.

Roberto Mancini’s men will head for Wembley in London, where they will also play next Saturday 26, against the Group C runners-up, one of Netherlands, Ukraine or Austria, going with the knowledge that they have now equalled their best-ever unbeaten run of 30 straight games without defeat, which was achieved under Vittorio Pozzo between 1935 and 1939.