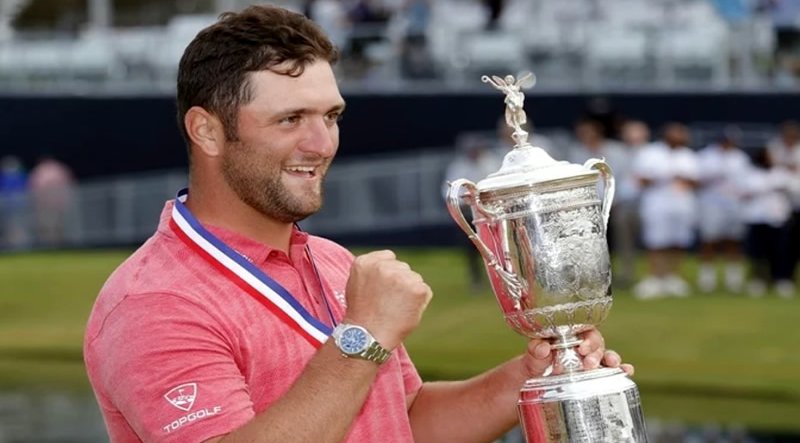 Spanish golfer Jon Rahm Rodríguez finished six-under-par to win the US Open at Torrey Pines South Golf Course in San Diego, California on Sunday 20, to claim his first-ever golf major, and become the first Spaniard – born in Barrika, in the Basque Country – to win one of the most prestigious golf tournaments in the world.

He birdied the last two holes to finish one stroke ahead of Louis Oosthuizen from South Africa, with 2020 champion Bryson DeChambeau finishing way down the field on three-over-par.

It was a tournament he was clearly dest¡nes to win, having tested positive for Covid-19 and having to self-isolate for ten days, he told Golf Channel, “I’m a big believer in karma and after what happened a couple of weeks ago I stayed really positive, knowing big things were coming”.

Three players shared the lead at five-under-par at the start of the final day’s play, Oosthuizen, Mackenzie Hughes, and Russell Henley, but the pack soon started closing in on them, with Rahm getting a birdie on the first and second holes, as DeChambeau came agonisingly close to making a hole-in-one on the eighth before tapping in for the simplest of birdies to go into the lead on five-under-par.

Rory McIlroy had the chance to join him in the lead but missed from seven feet on the seventh, before Oosthuizen joined DeChambeau at the top of the leaderboard with a birdie on the ninth and the 10th to take a two-shot lead.

Everything went wrong for most of the leaders on the par-three 11th as McIlroy three-putted, Oosthuizen made a bogey after missing the green, and Hughes saw his pulled tee shot get stuck in the branches of a tree and the resulting double-bogey dropped him back to two-under-par.

By now, it was Rahm and Oosthuizen challenging leader Harris English who had birdied three of the last five holes, but Rahm curled a birdie on the 17th to tie the lead, and remarkably, did the same on the 18th.

Luckily for Rahm, Oosthuizen pulled his drive on the 17th into a hazard and was unable to save par, meaning he needed to eagle the last – as he did on Saturday – to force a play-off, but his tee shot on the 18th flew into the rough, leaving him no option but to lay up, and despite a good effort, he could not hot the hole with his next shot, and Rahm was the US Open champion.