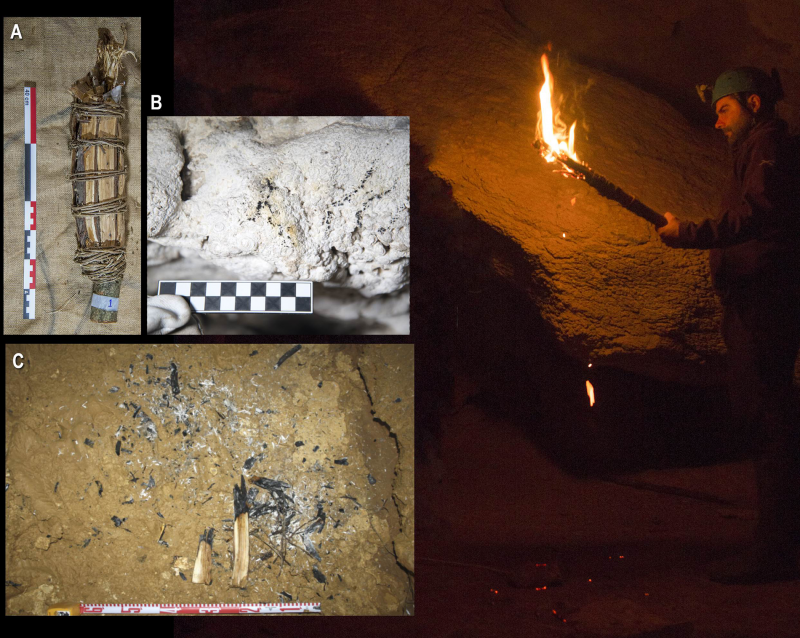 The torch experiment. Image: PLOS ONE

A recreation of three common types of Palaeolithic lighting systems – torches, grease lamps, and fireplaces – illuminates how Palaeolithic cave dwellers in northern Spain might have travelled, lived, and created in the depths of their caves, according to a new study.

A RECREATION of three common types of Palaeolithic lighting systems – torches, grease lamps, and fireplaces – illuminates how Palaeolithic cave dwellers in the Basque Country might have travelled, lived, and created in the depths of their caves, according to a study published June 16, 2021 in the open-access journal PLOS ONE by Maria Angeles Medina-Alcaide from the University of Cantabria, Spain, and colleagues.

Humans need light to access the deepest areas of caves – and these visits also depend on the type of light available, as light intensity and duration, area of illumination, and colour temperature all determine how the cave environment can be used. In the study, Medina-Alcaide and colleagues used archaeological evidence of lighting remains found across several Palaeolithic caves featuring cave art in southwest Europe to experimentally replicate the artificial lighting systems presumably used by the original human cave dwellers, allowing immediate empirical observations.

The team conducted their experiments at Isuntza 1 Cave in the Basque region of Spain. Their replicated lighting was based as much as possible on archaeological evidence found in similar Palaeolithic caves, and included five replicated torches made variably from ivy, juniper, oak, birch, and pine resins, two stone lamps using animal fat such as bone marrow from cow and deer, and a small fireplace burning oak and juniper wood.

They found that the different lighting systems all had diverse features, suggesting their likely selection and use across different contexts. Wooden torches made of multiple sticks worked best for exploring caves or crossing wide spaces, since they projected light in all directions – up to almost six metres in the experiments, were easy to transport, and did not dazzle the torchbearer despite having a light intensity almost five times greater than a double-wicked grease lamp.

Torch light lasted for an average of 41 minutes in this study, with the shortest-lived torch burning 21 minutes, and the longest burning 61 minutes. The torches tended to function irregularly and required close supervision when burning – though they were easy to relight via oxygenation, that is moving the torch quickly side to side.

The researchers found the main torch disadvantage was the amount of smoke production. In contrast, grease lamps worked best for lighting small spaces over a long period – with a light intensity similar to a candle, they were able to light up to three metres or more if larger or multiple wicks were added.

Though grease lamps were not well-suited for transit due to their dazzling effect and poor floor illumination, they burned consistently and without much smoke for well over an hour, complementing the use of torches. The team made one fireplace, a static system, which burned very smokily and was extinguished after 30 minutes. They note that the location was likely not appropriate due to air currents in the cave.

The team notes that the practical insights and observations gained from their experimental replications are invaluable for a deeper understanding of what it may have been like to access the darkest parts of inhabited caves, especially in order to create art, and say that future experimental lighting studies will be useful in continuing to unravel our ancestors’ activities in their caves.

“Artificial lighting was a crucial physical resource for expanding complex social and economic behaviour in Palaeolithic groups, especially for the development of the first paleo-speleological explorations and for the origin of art in caves,” the researchers added.