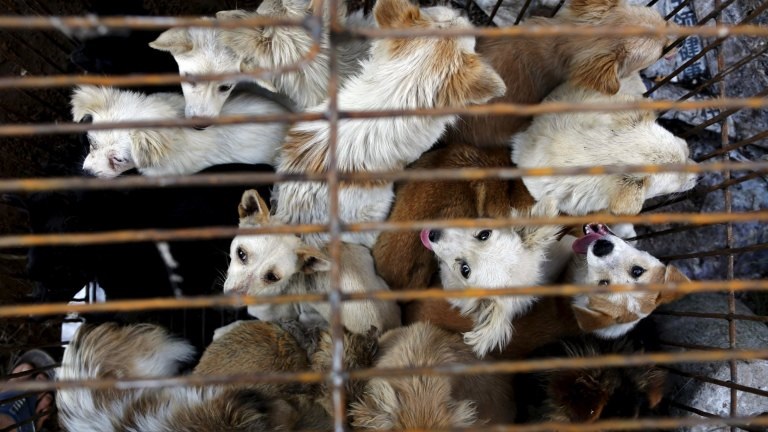 Animal rights activists operating in China have managed to save the lives of 68 dogs that were minutes away from being slaughtered at the Lychee and Dog Meat Festival in the city of Yulin- located in the Guangxi autonomous region.

Animal rights non-profit Humane Society International (HSI) said in a statement that the activists intercepted a truck packed with the dogs outside the city just as the festival was set to begin.

The festival is held every year during the summer solstice, with attendees consuming dog meat and lychees as the name suggests. Thousands of dogs are killed (in ways too horrific and cruel to be described here) to be consumed at the festival each year.

According to members of the organisation, the dogs seemed to be terrified and exhausted having endured a long hot journey on the highway- without access to food or water.

The dogs were tightly packed into rusty wire cages that were so small the animals could barely move—a situation worsened by the oppressive heat. Activists said that the dogs were panting and appeared traumatised when they discovered them- many of the poor creatures were in a very poor physical state.

Activists had been urging authorities in Yulin to conduct more checks on the highways entering Yulin to stop trucks carrying dogs. But after being largely ignored by officials the group decided to take matters into their own hands.

One of the activists, Liang Jia, said in a statement: “It was so frustrating to watch trucks of dogs arrive in Yulin when the authorities were supposed to be stopping them and confiscating the dogs. So we decided to save some dogs ourselves and waited on the highway for the next truck to arrive.”

Eventually, the activists flagged down a truck driver and convinced them to hand over the dogs because they were clearly stolen pets, for which he obviously didn’t have the required legal paperwork.

“The dogs offered us their paw just like a pet at home, and they had healthy teeth which means someone was looking after them before they were stolen,” Liang said.

“The Yulin authorities have a responsibility to protect public health, even if they don’t also care about the animals as we do. These poor dogs look sick, and thankfully now they will receive veterinary care, but who knows what diseases they could carry that would end up in the food market.”

After rescuing the dogs from the truck, the activists took the animals to a temporary holding facility to rest and receive veterinary care. They were then taken to a shelter supported by HSI.

Peter Li, China policy specialist for HSI, said in a statement: “These activists are typical of a new generation in China who strongly oppose the dog and cat meat trades and are prepared to take action to see it ended in places like Yulin.