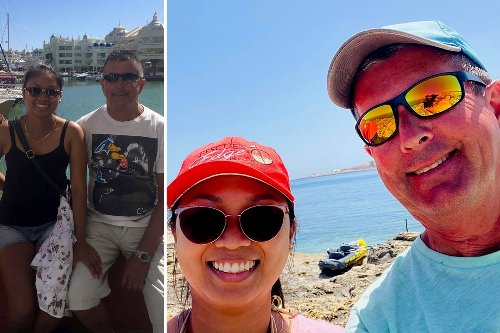 Fiancee Watches In Horror As Brit Dad-Of-Three Drowns In Sea After Falling From Rocks In Malta. image: Twitter

Fiancee Watches In Horror As Brit Dad-Of-Three Drowns In Sea After Falling From Rocks In Malta Just As They Prepared To Start A New Life Together.

A British father-of-three tragically lost his life after he fell into the sea from rocks in Malta. His horrified fiancee watched on helplessly as the powerful current dragged him away to his death.

Stephen Martin Thomas, 63, was pulled from the water by rescue services near the National Aquarium, located in the tourist town of Qawra. He was pronounced dead at the scene.

Police believe the “strong swimmer” lost his balance and was then dragged out to sea, reported the Times of Malta.

His fiancée has finally spoken of her grief in the wake of the tragedy, which happened recently, on June 12.

CJ Tinay Agos, 30, revealed she was called to Qawra police station later that afternoon. She added: “When I got there, they told me the most heartbreaking news that he was gone and they found him in the sea face down.”

Officers showed the young woman a photo of Thomas, looking on in shock, his fiancee immediately confirmed his identity. She said: “My heart shattered when I saw his face.”

Thomas, called Steve by friends and dubbed a ‘proud Welshman’, was a regular visitor to Malta and had been on holiday there every year for 12 years before meeting his partner, making the permanent move to the Island three years ago.

The pair got engaged in 2020 and planned to tie the knot later this year. His fiancée said he knew the area well and was a good swimmer, adding: “I still can’t believe this has happened. He was such a good swimmer… he even taught me how to swim. He was so fit for his age. He was such a funny man, always making me laugh. He was also the most loving, caring, and friendliest person, always trying his best to help everyone who needed it.”

She added: “He will be missed by his friends and family, and most especially by me.”

His funeral, described as a peaceful celebration, took place on June 19.