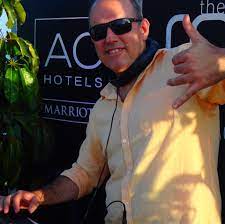 Dj Toulalan begins his summer tour this week at the Feria de La Cala del Moral, which will take him to Sotogrande (Cádiz) or Jaén during the month of July.
With dates to be revealed as a part of the combo BEAT3, whose most recent performance prior to the pandemic was his debut in the region of Axarquia for the Carnival of Frigiliana 2020. The producer will deliver two dance sessions on Friday 25 and Sunday 27 at the Rincon fair from 3pm.
The artist expressed gratitude to the City Council of Rincón de la Victoria’s Department of Fairs and Festivities for reserving two dates of its programming for these two performances, “in which we will once again provide contemporary songs fused with classics from the 1980s and 1990s.”
He also complimented the fact that this event, centred on the Plaza Gloria Fuertes, at the entrance to the Sala de Las Musas’s stage, “reinforces all existing health and safety procedures.”
As was the case in February 2020 with BEAT3’s final concert to date, the sessions by Dj Toulalan will act as a warm-up for the many performances that take place daily until midnight in La Cala del Moral’s public space.
On Friday, the charity event will take over from the Asociación A Bailar La Cala del Moral’s production.
Following that, at 10:30pm the flamenco fusion combination of Belén Ballesteros will close the day.
And Sunday 27th, there will be two opportunities to enjoy the Torrox producer’s music selections.
Follow link below for the full line up of performances:
The La Cala del Moral Fair will be held on June 24, 25 and 27
“It is a privilege to be able to accompany on the same stage the performers of the Al Andalus orchestra who have more than a decade of experience animating the fairs of La Cala del Moral and Rincón de la Victoria. Opening the summer tour in the region of La Axarquía where I was born and where I have spent most of my life has an added emotional charge. We have suffered and continue to suffer from this damned pandemic, but with the utmost caution it is time to start to resume those festive moments that have always served to strengthen our emotional ties with friends and family,” says veteran journalist and radio broadcaster Fran Extremera, also known artistically as Dj Toulalan.