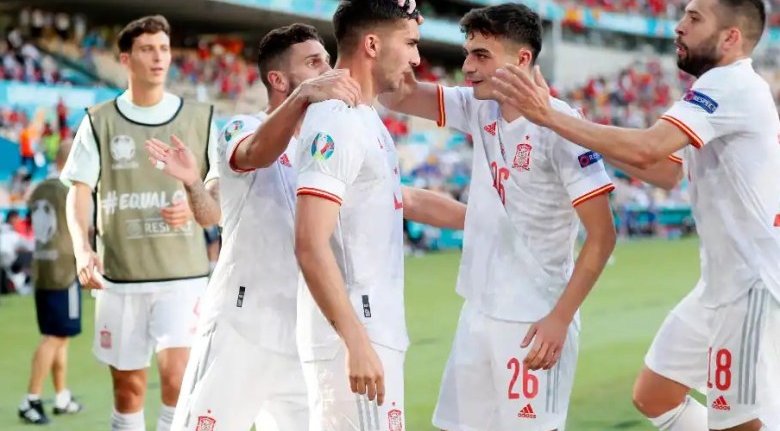 Spain Thrash Slovakia 5-0 And Make Their Way Into The Euro 2020 Knockout Stages.

Spain paved their way into the Euro 2020 knockout stages with a very comfortable 5 goals to nill win over Slovakia in their final group stage fixture.

La Roja came into this one on the back of two draws, managing just one goal from 180 minutes, but all concerns surrounding their troubles in front of the goal soon vanished. Luis Enrique‘s men managed five in their final game at La Cartuja in this competition, making easy work of Slovakia.

Spain missed another penalty here, Alvaro Morata failing to find the net from the spot after Gerard Moreno missed a spot-kick in the draw with Poland.

But after stopping the penalty, Slovakia goalkeeper Martin Dubravka went from hero to zero as he lost Pablo Sarabia’s shot in the sun before palming the ball into his own net.

Spain made it two before the break, Aymeric Laporte heading home Gerard Moreno’s pin-point cross, and a comfortable win turned into a thrashing in the second half amid the sizzling Seville heat.

Sarabia got the goal he deserved when he turned home Jordi Alba’s low cross, and Ferran Torres turned home a Sarabia cross with his first touch of the game, a stylish finish from close range.

Pau Torres then came off the bench, and with one of his first touches of the game, he made it five, though the goal could end up going down as another own goal with Juraj Kucka getting a sizable touch before the ball rolled in.

It was a convincing performance from La Roja, one unrecognisable from Spain’s opening two games. Though, perhaps a slow start was to be expected given the issues Luis Enrique’s men encountered coming into this tournament and the lack of group preparation they have had.

They now head to Copenhagen for the match with Croatia on Monday.