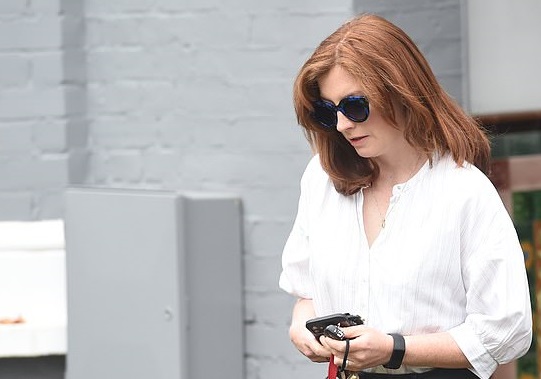 MATT Hancock’s wife was seen leaving her home this morning, helped into a car by a friend, still wearing her wedding ring after her husband’s shocking affair was exposed.

Martha Hancock, who has been married to the Health Secretary for 15 years, had earlier been seen out walking her dog – just hours after the bombshell news.

She gave a half-smile as she stepped out in dark sunglasses this morning after The Sun exposed her husband’s affair last night. Mr Hancock cheated on his wife with Gina Coladangelo, 43, who he hired last year with taxpayers’ money, as Covid gripped Britain.

Mr Hancock, 42, and millionaire lobbyist Gina were caught on camera in a steamy clinch at his Whitehall office. Whistleblowers revealed the Health Secretary had been ­spotted cheating on his wife of 15 years with married Ms ­Coladangelo.

He was caught kissing her at the Department of Health’s London HQ during office hours last month as the mutant strain began spreading. Matt Hancock married Martha, an osteopath, in 2006 and the pair have three children together.

Matt Hancock has been accused of cheating on his wife with a close friend and lobbyist who is a taxpayer-funded adviser to his department. He was allegedly caught on camera kissing Gina Coladangelo, according to The Sun, which published photographs of what it called a “steamy clinch”, at his Whitehall office.

Coladangelo, met Matt Hancock when both were attending Oxford University, was a director at lobbying firm Luther Pendragon.

The security camera pictures were snapped on May 6. Mr Hancock, 42, has been married for 15 years to Martha, and the pair have three children.