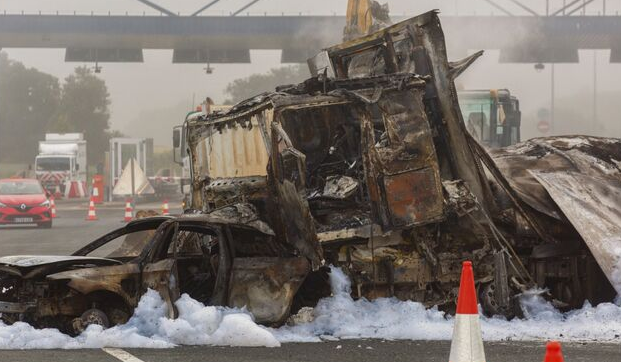 Two Dead When a Truck Hit a Car Stopped At a Toll Booth In Alava.

Two people died last night following an accident in which their vehicle was hit by a lorry in Alava.

THE vehicle was hit by a lorry at the AP-1 toll of Etxabarri-Ibiña, in the municipality of Zigoitia (Alava), according to the Basque Department of Security.
The incident occurred at 10.45pm, June 24, when an articulated heavy vehicle travelling “at an inappropriate speed” towards Vitoria collided with two cabins at the collection station, hitting a passenger car.
The impact, which also affected two toll booths, caused the vehicle to go up in flames and the two occupants, who were tourists, sadly died.
Emergency services attended the scene and, once the fire had been extinguished, the deaths of the two people were confirmed, Malaga Hoy reports.
The driver of the lorry was a foreign national and was transferred to the Santiago hospital, Vitoria, with mild injuries. He has now been detained by the Ertzaintza for the alleged crime of homicide caused by gross negligence.
The AP-1 motorway currently still remains closed in the direction of Burgos and the Ertzaintza Traffic Unit is investigating to clarify the circumstances surrounding the incident of the deaths.
The news comes as an octogenarian woman died after crashing her car into the wall of a supermarket in Spain’s Denia. The 80-year-old sadly died on Tuesday, June 22, and was of Belgian nationality. She died after crashing her car into a wall at a Denia supermarket.
According to the Levante newspaper both the National Police and Local Police rushed to the scene of the accident where they attempted to revive the driver and give her first aid. A few short minutes later ambulances arrived at the supermarket. The ambulances were from SVB and from SAMU. The medics attempted to save the life of the driver.
Sadly though the medics were unable to revive the woman and she died. A forensic examination is expected to be carried out by the Institute of Forensic Medicine, in order to determine the cause of death. According to preliminary investigations, it is believed that she could possibly have fainted as she attempted to leave the supermarket as there were no brake marks from her vehicle before it hit the wall.