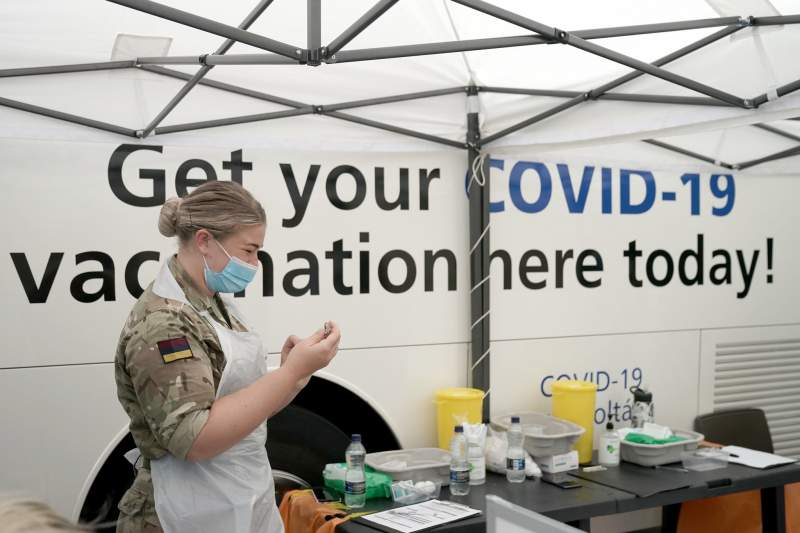 'Grab A Jab' Vaccinations For All Over-18s Launched In England For 'Race To Finish'. image: NHS UK

‘Grab A Jab’ Vaccinations For All Over-18s Launched In England For ‘Race To Finish’.
Stadiums, shopping centres and theatres are among hundreds of walk-in vaccination sites opening across England this weekend in a bid to boost the number of people getting jabbed over concerns of rising infections- mainly due to the Indian Delta version of the virus.

People who get a vaccine at the Emirates Stadium between now and Monday are being offered a free tour of the stadium as part of their visit.

The event is called Gunner Get Jabbed, and organisers said they hoped to get “even more people down there than were at Spurs’ stadium”.

The “grab a jab” campaign means any adult will be able to get a Covid vaccine without an appointment. NHS England boss Sir Simon Stevens said the country was in a “race to the finish line” in its vaccine programme.

Vaccines Minister Nadhim Zahawi and London Mayor Sadiq Khan joined a London vaccine summit on Friday in a bid to boost jab uptake in the capital, which lags behind the rest of England.

Data shows that an estimated 83.1 per cent of over-50s in London had received both doses of vaccine by June 20. However, all other regions across the country are above 90 per cent, according to the figures published by NHS England.

Analysis shows that the top 19 local authority areas in England with the lowest proportion of fully vaccinated adults aged 50 and over are all in London.

Health Secretary Matt Hancock said: “We are throwing open the doors of hundreds of vaccine centres across the country this weekend so anyone can just show up. “I urge anyone who has yet to take up the offer to head to their nearest walk-in centre this weekend and get the life-saving jab.

It’s becoming clearer all the time how effective our vaccines are in protecting against the Delta variant and with three in five people double-vaccinated, we’re well on our way to the whole country getting the fullest possible protection. So I’d urge everyone not yet fully vaccinated aged 18 and over to get your first and second doses as soon as possible to protect yourself and your loved ones.”

Mr Hancock is at the moment mired in controversy over his alleged affair with a close aide, Gina Coladangelo, seen packing her car and leaving the family home yesterday.