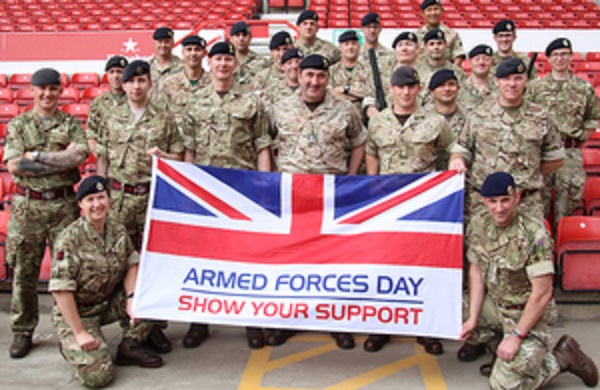 The UK Comes Together To Celebrate This Year’s Armed Forces Day.

Armed Forces Day is an annual event celebrated in the UK in June to commemorate servicemen and servicewomen in the British Armed Forces.

On Friday 25 June Prime Minister Boris Johnson met military personnel at Downing Street, to thank the Armed Forces for their service across the globe and their support in the fight against Covid-19.

This year, Armed Forces Day takes place today, on Saturday 26 June – following a year in which the armed services have gone above and beyond what is expected to support the NHS during the coronavirus pandemic, and been deployed across the UK, from helping to build vaccine sites to supporting community testing and providing clinical support.

It is a day to show support for those currently serving in the army, families, veterans and cadets

Whether they are in the Royal Navy, British Army, or Royal Air Force, it’s a chance to thank our troops and their families for their hard work and the sacrifices they have made for us over the years.

Throughout the UK communities celebrate both events in a variety of ways such as military displays, ceremonies, fetes or parades involving regulars reservists and Territorial members and of the Armed Forces of Army, Navy and RAF, Veterans and Cadet Forces.

Many events have been organised by the Royal British Legion which includes the Veterans Day national event in Blackpool. Councils, ex Services organisations such as COBSEO: the Confederation of British Service and Ex-service Organisations, schools and communities will be holding their Armed Forces events.

The Mayor of London and Chair of the London Assembly welcomed members of the British Armed Forces, cadets and representatives on Monday 21 June for a flag-raising ceremony at City Hall.

The event aimed to honour the bravery and commitment of service personnel past and present, ahead of Armed Forces Day which is taking place today.