Shock As Netherlands Knocked Out Of Euro 2020 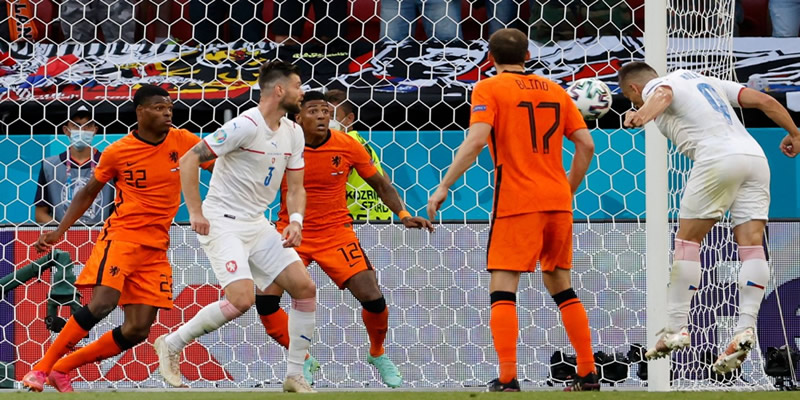 Shock As Netherlands Knocked Out Of Euro 2020. image: twitter

The Netherlands suffered the biggest shock defeat of Euro 2020 so far, at the hands of the Czech Republic this afternoon, Sunday 27, in the Puskas Arena in Budapest, in front of an estimated 53,000 supporters, losing 2-0, and having their Juventus star Matthijs de Ligt red-carded as well.

A quarter-final match with Denmark on Saturday, July 3, in Baku, Azerbaijan is the subsequent result for Jaroslav Silhavy and his Czech team, who in no way looked like the underdogs that they came into the match tipped as.

PSV’s Donyell Malen had a glorious opportunity to put the Dutch ahead in the 52nd minute, through with a one-on-one with Sevilla’s Tomas Vaclik, the Czech keeper, but he spurned his chance, and then in another opportunity, Denzel Dumfries’ diagonal run was found by former Man United player Daley Blind, but Tomas Kalas did well to slide across and block the shot.

With the Dutch reduced to ten men on the hour, after referee Sergey Karasev had sent Matthijs de Ligt off for denying a clear goalscoring opportunity for Patrik Schick, with what was deemed a deliberate handball as the last man, with the ref originally producing a yellow, but changing it to a straight red after reviewing with VAR.

Tomas Holes nodded in the opener 13 minutes after the sending off, on 68 minutes, finishing off a knock-back from a Tomas Kalas corner, and then he was the provider as he teed up Patrik Schick to smash a thunderbolt of a shot into the Dutch net for 2-0 after 80 minutes, a disappointing end for Frank de Boer’s side, who had been elevated to one of the favourites to win Euro 2020 after some convincing wins in the group matches.

Bayer Leverkusen striker Schick is now level with Portugal’s Cristiano Ronaldo on four goals for the tournament, with both men still in the tournament, Portugal playing Belgium this evening.