Spain Need Extra Time To Put Croatia Out Of Euro 2020 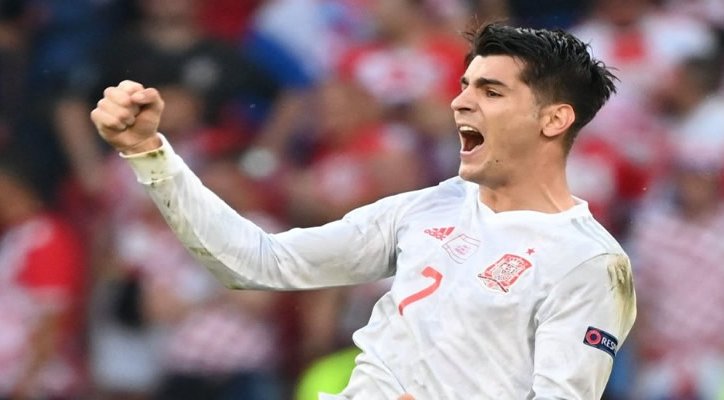 Former Euro champions Spain were in action this afternoon, Monday 28, in their first match of the knockout phase of Euro 2020, up against what has so far been a very good Croatia team, in the Telia Parken Stadium in Copenhagen, Denmark.

Luis Enrique’s men struggled in the group matches, but suddenly came alive in the final match where they ran out 5-0 winners over Slovakia, so one has to wonder if that could be the spur that his players need to move forward with confidence in the tournament, with Pedri today breaking Wayne Rooney‘s record as the youngest player to appear in the knockout stage of the Euros.

Spain wasted two glorious chances early on, as Atletico Madrid captain Koke missed one, and then Alvaro Morato, somehow managed to head a clear goalscoring chance straight to the goalkeeper.

One of the most bizarre own goals ever seen followed in the 20th minute, as a harmless soft backpass – almost from the halfway line, 49.4 yards to be precise – from Pedri to his keeper, Athletico Bilbao’s Unai Simon, who obviously had a momentary lapse of concentration, as he went to kick the ball and it skidded off his boot and into the Spain goal, to give Croatia the lead.

Finally, Spain’s pressure paid off in the 38th minute as Livakovic managed to parry a shot from Gaya, but it fell to PSG’s Pablo Sarabia who fired in his second goal of the tournament from the edge of the box to level the scores.

Pressing for a second goal, Spain went 2-1 ahead when Chelsea captain Azpilicueta fed Pedri, who in turn passed to Ferran Torres whose pinpoint pass fell for Azpilicueta to bury in the net on 57 minutes.

It looked like game over after 76 minutes when a beautiful crossfield pass picked out Manchester City striker, Ferran Torres, who calmly rounded the keeper to slot Spain’s third goal of the match, but, Croatia didn’t lie down so easily, and a goalmouth scramble, setup by Luca Modric’s skills, saw Orsic put the ball across the line for 3-2.

Incredibly, in the 90th minute, Orsic sent a pinpoint pass for Pasalic to head home and it was extra time, who would have thought it!

After the restart, Morata became the hero after 100 minutes, as he took down Olmo’s cross at the back post superbly and smashed a left-footed shot past Livakovic for 4-3 Spain, and it wasn’t over, as substitute Olmo was again the provider, on 103 minutes, this time for Oyarzabal, who slotted the ball past the Croatia keeper for 5-3.