Gina Coladangelo Allegedly Ditching Husband To Be With Matt Hancock 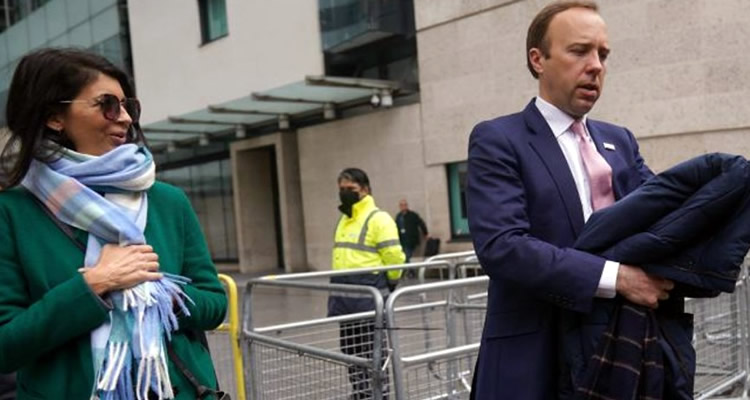 According to reports in The Sun, Matt Hancock and Gina Coladangelo, after having their affair exposed last week, are looking to make a go of their relationship, and are moving in together, with friends of Gina’s also allegedly confirming it.

Both of them were married, Mr Hancock had been 15 years with his wife Martha, while 43-year-old Gina was married for 12 years to 54-year-old Oliver Tress, the founder of the company, Oliver Bonas, who, according to family friends is said to be “devastated” by the split.

Gina has not been seen since last Friday 25, when she was pictured a few hours before the news broke, loading her belongings into her Audi outside the home she shared in Wandsworth, South West London, with her husband and their three children.

One of their neighbours is reported as saying, “Gina and Matt are giving it a proper go and Olly was left reeling. They had lots of friends here so we are all trying to help look after Olly”.

Lord Chancellor Robert Buckland meanwhile, the most senior lawyer in Britain, when asked by The Sun if he thought there had been public interest in their revelation, replied, “In a nutshell, there was. I think it’s important those of us who help set the rules, adhere to them”.

In The Commons, Cabinet Office minister Julia Lopez admitted that the device which recorded Mr Hancock was ‘not covert’, and told MPs that the camera was an ‘outlier’, but that it was not general policy for recording devices to be put in ministerial offices, confirming it was a CCTV camera operated by the Department of Health, adding that responsibility for security was down to the department, which was led by Mr Hancock until his resignation.

Responding to this, Chris Bryant, the Labour MP said, “Something really doesn’t add up here. The secretary of state knew it was there. And yet, we’ve all seen the video. If that’s true, he must be the stupidest man on Earth. Is Mrs Lopez really trying to persuade us that he knew there was a camera in his office?”.