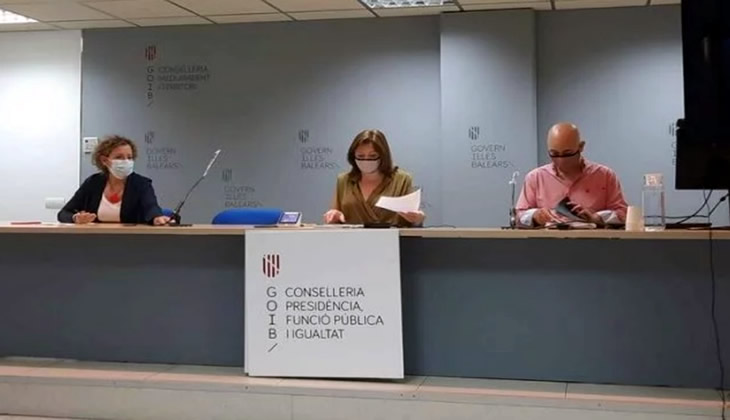 MALLORCAN government propose €200,000 fine for organisers of  June 15 concert believed to be a source of the student Covid outbreak
Mercedes Garrido, the Regional Minister of the Presidency, Public Function, and Equality, announced today, Tuesday 29, that the Government has proposed a sanction of €200,000 for the promoters of the reggaeton concert held in the Plaza de Toros de Palma, on June 15.
Ms Garrido’s announcement came during a press conference following the extraordinary meeting of the Platerbal Operational Command Centre with Aina Calvo, the Government delegate in the Balearic Islands, along with Toni Salas, the president of the Federation of Local Balearic Entities (Felib).
It is believed that this concert was one of the sources of the mega outbreak of Covid-19 infections associated with students returning home from school trips to the Balearic island, with Ms Garrido describing the concert as “unbridled”, and has asserted that those who do not comply with the Covid-19 protocols in the community will be punished “forcefully and impeccably”.
The minister explained that as a result of the intervention of officers of the green patrol of the Local Police, and the inspectors of the Ministry of Tourism, an emergency report was issued that allowed the concert on the 20th to be held in compliance with the regulations.
It will be possible for the concert promotors to appeal against the proposed fine, but the councillor has indicated that the administrative procedures of the sanctions are “extensive, but they will end up paying. Violators must know that we will not leave them alone and when an infraction is made, it will be paid”, she stressed.

According to Garrido, another focus of the mega-outbreak that has yet to be identified is boat parties, as well as parties in underground hotel nightclubs, or in the parking lot of a water park, as observed on social media footage, which is currently being investigated by the Mallorcan government.

Statements are being taken from the young people who had been present at these events, and during the meeting, Ms Garrido has requested the collaboration of the Guardia Civil and the National Police to identify the offenders and, from there, process the sanctions, as reported by moncloa.com.