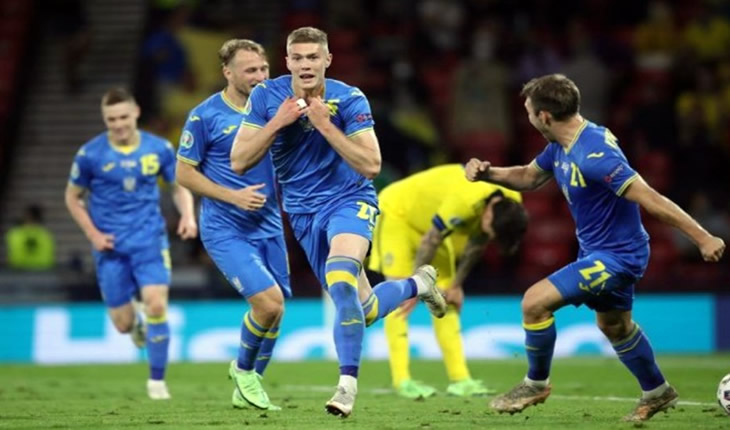 Ukraine put Sweden out of Euro 2020 with a last-minute goal. image: twitter

The final match of the Round of 16 of Euro 2020 took place this evening, Tuesday 29, as Sweden took on Ukraine at Hampden Park, Glasgow, with the prize at stake of a quarter-final clash with England, in Rome’s magnificent Olympic Stadium.

Sweden took the impetus right from the start as Ukraine struggled to get out of their own half, until on eleven minutes West Ham’s Andriy Yarmolenko returned a pass to Yaremchuk, whose shot was pushed away by Olsen in the Sweden goal, but a sign to the Swedes of how dangerous this Ukrainian team can be if given the spaces.

Then after 27 minutes, the game exploded into life, Manchester City defender Oleksandr Zinchenko hammered home a shot from outside the box, with Olsen just getting his fingertips to the ball, but it ended up in the back of his net, to give Ukraine the lead.

Emil Forsberg of RB Leipzig, had scored four goals in his last four games for Sweden, and in the 43rd minute came number five, as his shot took a deflection off Zabarnyi’s leg and beyond Bushchan in the Ukraine goal, to level the scores.

The second 45 minutes was a case of both teams being wary of making a mistake, as it got a bit tedious, with play almost at walking pace at times, with the only real chances falling to Emil Forsberg, who hit the woodwork twice, and then on 90 minutes, it looked like Sweden would get the winner, but a fantastic last-ditch block by Zabarnyi on Kulusevski sent the game to extra time.

Then disaster struck for the Swedes when Ukraine sub Besedin was caught on the knee by Danielson, who actually made contact with the ball first, but made a terrible follow-through, and, after a VAR check, the ref produced the red card and Danielson was off, Sweden down to ten men, as Besedin was helped from the pitch.

With penalties looming, Zinchenko sent one of his precision crosses into the box and there was Dovbyk, who bent down and headed home for a Ukraine win. Next stop is Rome, and England, on Saturday 3.