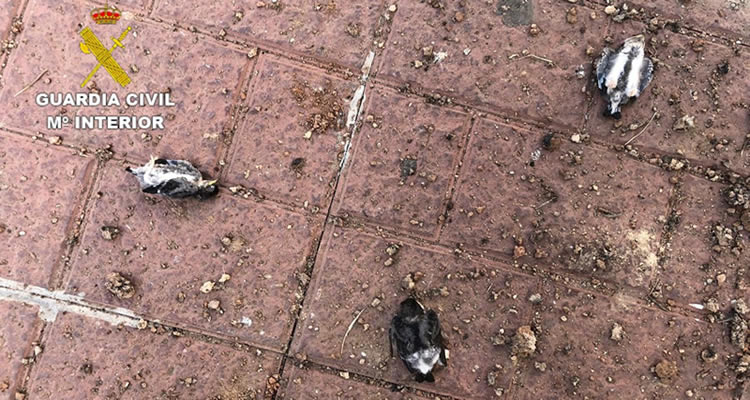 Granada Guardia Civil officers from the Seprona Nature Protection Service unit have investigated a 69-year-old woman from a locality in the Granada Metropolitan Area as the alleged perpetrator of a crime against wild flora and fauna after she destroyed thirty common Housemartin nests (Delichon urbicum), causing the death of forty-four Housemartin chicks – a protected species in Andalucia.
Several upset neighbors had called the 112 telephone number of the Emergency Service of the Junta de Andalucía, reporting the discovery of a large number of dead birds on the pavement of a street in the city, at which point the Seprona Command was informed of the report and they immediately mobilised a patrol from the Sierra Nevada de Granada Detachment to the location.
On arrival at the scene, officers discovered the remains of many housemartin nests, and counted up to forty-four dead chicks lying on the pavement, with almost the same number of smashed eggs.
The Seprona officers verified that the nests had originally been hanging from the ledge of a roof above, and that the investigated woman had clearly been the one who destroyed them, who, when questioned, told the police that the windows below the nests were getting dirty because of the nests.

Informing the woman that she had destroyed nests that belonged to a common Housemartin, which is on the Junta de Andalucía’s list of protected species, she was told she would be placed under investigation for a crime against wild flora and fauna.

Under exceptional circumstances, and as long as the species causing the inconvenience are not among those included in the Andalucian Catalog of Threatened Species, the Territorial Delegate for Agriculture, Livestock, Fisheries, and Sustainable Development of the Junta de Andalucía, may authorize the removal of the remains of swallow nests.
This action can only take place though providing that the removal is carried out outside the nesting period of the birds, that is, before the start of the nest construction or when the chicks have permanently abandoned it, as reported by granadadigital.es.