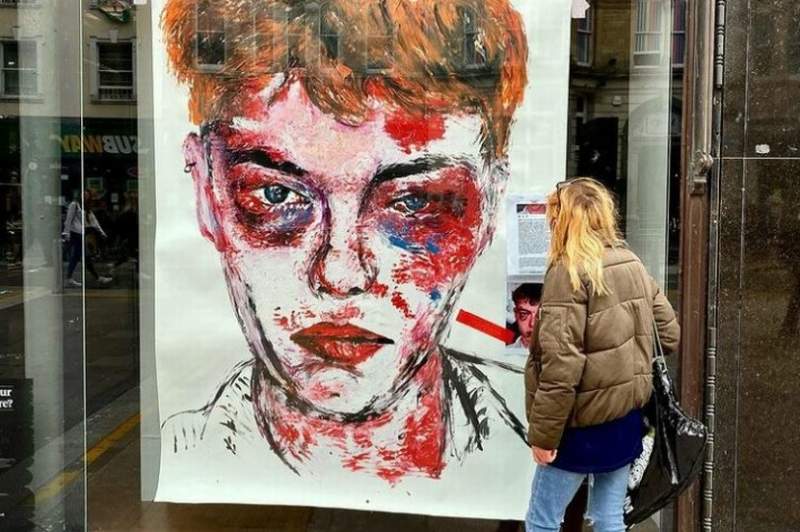 An artist from Wales has painted a huge mural dedicated to a young man battered in a homophobic attack in Liverpool, UK.

Josh Ormrod, 19, was attacked for his bisexuality on Fleet Street in Liverpool on June 17. The mural, painted by 31-year-old Nathan Wyburn, is now hanging in an arcade window on one of the busiest streets in Cardiff that is also opposite one of Cardiff’s busiest LGBT+ venues.

Josh posted on social media site Instagram an image of his bloodied and bruised face along with a detailed description of the attack. The post now has over 380,000 likes and more than 13,000 comments.

Wyburn has previously created portraits of celebrities such as Dame Shirley Bassey, Prince Charles, and his personal favourite, Joanna Lumley.

He told the Liverpool Echo how seeing Josh’s Instagram post affected him: “I saw a lot of friends sharing it over Instagram. I am gay myself, and a member of the community, so having witnessed and experienced homophobia in my lifetime as well, growing up in South Wales, it was quite tough.

“I went through a lot of bullying and things. It just really resonated with me, and to see, from what I could see, was such a happy, outgoing, young boy, go through that, it was just absolutely heartbreaking.

“So the image, to me, as soon as I saw that selfie that he put online, to me, I just knew I needed to do something with it.”

“It’s just about spreading awareness that this is still happening, and during Pride month as well. I’ve recently seen that [Drag Race UK star] Divina de Campo’s mural [in Manchester] was being targeted and destroyed as well.

Josh, who is the person featured in the painting, said: “It’s absolutely mental to me that, not only did a successful artist want to use my pictures for a piece of his art, but also for that work to then be displayed in a busy city as an act of solidarity and defiance.

“Nathan is a kind and talented person, and I can’t express my gratitude enough to him for helping to raise awareness about the attacks the LGBT+ community has been facing.”